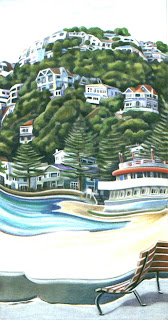 Last year there was a competition for a Wellington sonnet. I sat down earnstly and wrote a bit of romantic twaddle about taniwhas and so forth, whilst my daughter, amused, dashed off this one in an ad break. I think it has just the right amount of cynical wit for a 22 year old... (the illustration though is mine!)
Untitled (Everybody in hates , but like hell they’ll ever leave.)

Sometimes you smell like the sea at night
But you’d expect that living in a harbour.
Go! The drinking posse –
Ain’t nothing like seeing the masses pants-down
In the afternoon.
Let the bus drivers go on strike again
I don’t care about standing in the rain.
The friendly cries of Boy Racer’s burnouts doesn’t keep me awake at night
I live on the other side of the hill.
Yesterday I said ‘let’s go sit on the beach’
But the sand is hard and the wind slices me like death.
I get hungry in when the bread factory is in action
Until the burned toast smell becomes a little bit suffocating.
Oh , you sly dog, you.

Wonderful, Fifi - the poem and the painting, both!

I especially like Haley Jean's opening and closing lines and her not caring about 'standing in the rain.'

The best sort of poem - raw with truisms and quirky, authenticism. Love the drawing.