Your 8 year old self

I was going to write a blog post about the amazing Storylines Festival that I've been part of and touring with for the last week. It was going to be about all the schools we visited and the fabulous kids I dressed up in costumes from my book and the two festival days and how it was a blast (and it was) but then, someone posted this thing on facebook: 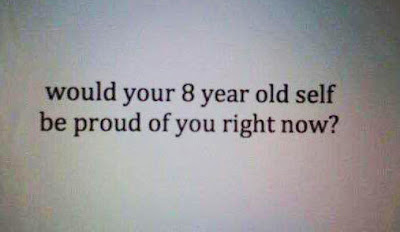 I thought back to when I was 8 years old, writing, drawing and making stuff- which is what I do now and I adore my adult life's work. When I was eight, I idolised the likes of Valerie Singleton from the BBC's BluePeter, and Vision On with Tony Hart. These were art heros for me and I never thought back then, that I'd end up as all the arty things I am. I would have, back then, look at me now and say 'I want to be you!'

It's useful to do that, look at yourself from a kids point of view, especially when the creative industry is full of unfulfilled expectations and bitter disappointments. These mostly arise from a need to be acknowledged and recognised (and paid) and it's like a drug. The more you get, the more you need until you can't see what you've done that was so good anymore. All you can see is what you failed to be (in your head!).

I immediately loved this idea of a young self perspective, and reposted it on my public page, which drew a wistful verging on regretful response. I wasn't quite prepared for that. I realised then that the my post wouldn't actually make anyone happy and might highlight where they thought they had dropped the 8 ball and 'damn that chipper flippin' Fifi for pointing that out. Thanks a lot!' (and lose a few hard won followers).

So let's get real here.
When you were 8, what was life like? This is how it was for me.

I was in transition from Pom to Kiwi. We had moved- a family of 5 with a father who had his career pulled out from underneath him and no tangible means of supporting us all. We ran away. We were migrants but mercifully not stuck in a container crate and left to die whilst politicians postured and ignored us. We stayed with the only people we knew in New Zealand for the whole of the summer until we were all sick of each other. My parents found a tiny flat. Dad found a job on Christmas Eve and our mother worked for the first time since she had got married at 21 (yes, women mostly gave up their jobs back then and got pregnant on their wedding night).

We spoke funny, I didn't know what togs and lollies were. I may as well have spoken Greek. I came home from school by myself and wondered if I'd ever fit in. My school report said:
"She is a cooperative pupil and is generally accepted by the other children. She has a sensible outlook but is sometimes disturbed by apparently trivial incidents."
We could re read that to say what was really going on:
"She does what she is told and behind my back the other students ridicule her and when the chance arises do her physical harm. She is terribly lonely and has no clue what to do here."

So, at 8, all I wanted was not to be a roaring success in the art world, all I wanted was acceptance and a friend. At 55 I have it. I have worked hard to get there and when I annoy or upset people and realise it, I try hard to put that right. I don't always succeed, and this is why I don't engage in any kind of way other than very peripherally with Twitter. That's a place that's very hard to put things right once it's out of your mouth- and I have a big mouth!

Child me would be amazed that I have not one community but several- in publishing, wearable art, illustration, craft, walking, old high school friends and of course my family. I love them all. She would be very happy that I had got there (and had she known would have spent less time being miserable and crying into her pillow).

So, look not at what you are doing for a job, but who you are being in the world to the people in your life. And if you are being an asshat (my fav new American expression!) then stop it. Make your 8 year old self proud.

Oh, and Storylines is awesome- I get to meet a lot of kids who I once was.