Cards on the Table- or 'I finished that sucker!'

I've recently been shortlisted for the Tessa Duder Award for YA Fiction; here's a bit about it and the shortlisted titles. My manuscript is one of 4 to make the cut and whilst I am confident that one of them is the winner and it isn't me, I am also over the moon that I got this far with my first draft. I also know that I have a lot of work to do on a second draft before I submit it to another publisher, but with the fantastic report and feedback of editor Anna Golden (sorry I can't link her anywhere but she's in Wellington and is just brilliant, thank you Makaro Press) I have definite things to go to work on to make my novel a piece of work that not only grips the reader but also makes sense!

So, can I tell you a bit about it? Not the plot and story- you'll have to wait for that, but how I came to write it. Just in case you think this is a flick of the wrist thing I just knocked off in my spare time. Like everyone, I have no spare time.

Wild Cards started as my Masters thesis project for the Scriptwriting MA I did at The International Institute of Modern Letters in 2003. This was a year I took out from freelance work to immerse myself in writing. That year I launched my first junior fiction novel 'Verity's Truth' (which had a contract before I started my studies) published by Scholastic. I also wrote 'Janie Olive- a Recipe for Disaster' that year in my uni break, as a holiday from writing. It was also subsequently published by Scholastic, and followed by 'Glory' a couple of years later.

But Wild Cards, my thesis doc, the kids TV drama series with young teen protagonists sat with it's meritous grade, getting dusty on the shelf; my characters trapped inside in their world, mid dialogue, falling down plot holes.

I had a brilliant idea; why not write it as a novel? I addressed this in a post in 2008 here called A Novel in a Week which outlines my attack method. So given that was 8 years ago, what happened and why did it take so long? (I love this clip from Family Guy- Stewie on Brian's novel which best describes a writer's progress).

I started all fluff and feathers, full of squawk and thought I'd nail it for the Text Prize. That yearly deadline came and went. Several times. I thought that being a published novelist, I'd be in line for a Creative New Zealand grant or a funded residency to finish it. After unsuccessfully applying for several of these, and getting all bitter and twisted in the process, I gave up. The novel lay fallow, Jono, Becka and Evie once again in suspended animation. I'd pick it up every so often, write another chapter and get distracted. Wonderful author and friend, Melinda Szymanik cracked the whip every so often and I reported back with word counts. I gave my WIP to too many people to read and they all gave me different feedback. Then I felt like I had shown everyone my ratty undies and felt a bit embarrassed about it all. I had, as Stephen King says in his excellent memoir 'On Writing', let the steam out. It was all limp and soggy.

Then last year, at the Margaret Mahy Day where I received a a Storylines Notable Book Award for  my non fiction book, Ghoulish Get Ups (just thought I'd slip that in, still proud!), it was announced that the Tessa Duder Award would now be open to previously published authors. That's it, I said to all around me, I have a reason to finish that flippin' novel! I need crazy deadlines in my life - this is why I am not a fine artist, a result of my design school training in commercial art back in the day.

I had it all mapped out; I was going to finish my Wearable Art entries, do the Storylines author tour, and then get stuck into it. Except suddenly all my work came at once; a puppet for Maori Television, two more for a Corporate video, a huge commission for the new Waitangi Museum and craft items ongoingly for The WotWot's Pinterest page, not to mention a myriad of little illustration jobs and a picture book contract. I had a window of less than 8 days to get it done and submitted, if I worked really, really hard. It seemed highly unlikely- not the working hard, I'm good at that, but the time frame. However, I am nothing if not bloody minded.

So I did, but not alone. I asked my dear friend and highly successful author Tania Roxborogh, in the midst of her getting the family house ready to sell and move cities, (good god I owe her one) to read through my chapters as I wrote them, look for typos and inconsistencies, track changes and rough edit. I got up and was at the keyboard at 6am every morning (unheard of for me, being awake at that early hour). I wrote all day until midnight, every day. Tania my angel, sent through the edits, I'd make changes and get onto the next chapter. I wrote up to 8,000 words a day. In one particularly caffeine fuelled session I wrote 10,000. I was on fire. Nobody got fed and the house was a tip. I didn't go out, I lived in a tee shirt and jeans (I do not believe in pyjamas for writing and I have none, so there) and the cat took up residence in a filing tray beside my computer.

And I finished it. I got it printed out and sent. The feeling of achievement was immense; like getting my wearable art creations in a box and off to Mainfreight for judging in Nelson. And I felt like I had released my characters into the wild, fulfilling their destinies and living their dreams. And in that process, done the same for myself.

To coin a few well worn slogans and phrases.

Nothing ventured, nothing gained, don't die wondering. Just do it. 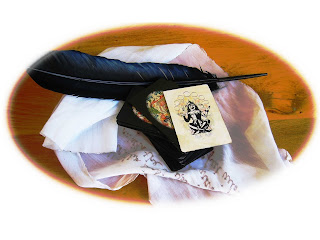