In 2017, I won the World of WearableArt,Weta Workshop Science Fiction Award, for The Organ Farmer, which included an internship opportunity at Weta Workshop.

Figuring out just how best to use my time at Weta Workshop was exciting.

I was a little unusual a candidate for the internship because some years ago I had worked there on The Lion, The Witch and theWardrobe, so I already knew a bit about sewing costumes and riveting and assembling armour. But I’ve always wanted to learn about sculpting, moulding and casting and was desperate to get into those departments and find out everything. Everything I knew I didn’t know!

It made sense for me to go with a project in mind and have the experts at Weta Workshop guide me through the processes to create something. After much thought, I hit upon the ideal project. Something that would give back somewhere in the community, whilst teaching me all I wanted to learn.

I approached ‘Dress for Success’ a charity which helps people prepare for interviews and employment with the simple but crucial advantage of an appropriate wardrobe. I suggested that I design and create a one-off sculpture that could be auctioned and the proceeds go to their charity. President Rhiannon McKinnon was thrilled with the idea and with the blessing of the World of WearableArt (WOW) and Weta Workshop, we made a plan.

First, I drew up a design. I decided an oversized shoe, a firm kind of women’s boot patterned with blossoming red flowers on one side and the koiri  kowhaiwhai pattern meaning ‘flourish’ on the other, held together with a seam of gold best represented ‘putting your best foot forward.’ A celebration of the 125th year of NZ Womens’ Suffrage. 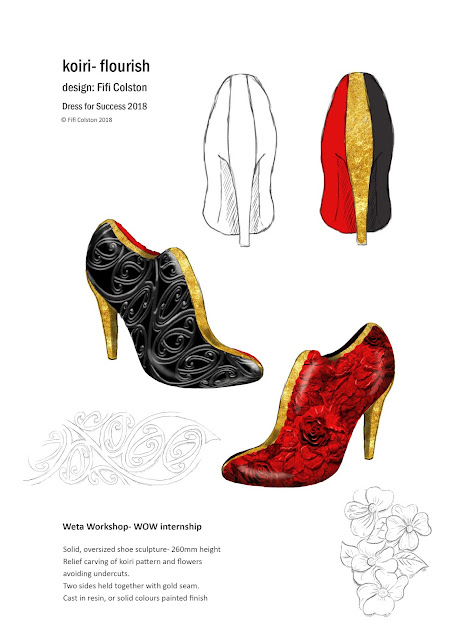 I sent my design in advance to Weta Workshop so I could hit the ground running on day one.
Jane Wenley met me at reception. Jane is amazing collectibles sculptor as well as a stunning WOW model. Such talent all wrapped up in one lovely welcoming tutor! And I needed one, having come up with my design, I had no idea how to make it. Jane took me to the wood workshop to find some useful chunks of timber as a base, which were then cut to the right size for me. She showed me how to build an armature for my model. Then I was introduced to the Plasteline sculpting compound, kept soft and pliable in something akin to a pie warmer. I was set up in the sculpting room, at a desk and lent all kinds of useful tools that were much handier than my own, whilst Jane showed me the ins and outs of sculpting and kept a gentle eye on my progress. Richard Taylor came in and gave me some tips too- about not being so tentative with my techniques but just getting stuck in with a bit of gusto. He really knows how to use those tools! 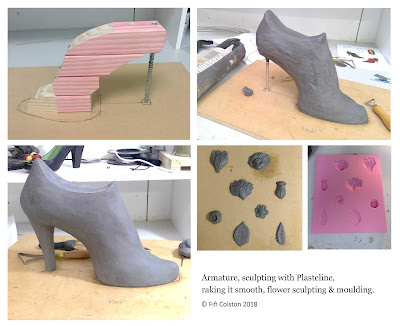 Over the week, Heather Palmer and Kat Sprowell popped in from WOW, hugs all around. I had lunch out with Jane and the crew at Park Road Post (very flash!) and learned how to use the espresso machine in the cafe like a pro. Very important, the caffeine! I learned the useful art of making dozens of replica Plasteline flowers from a silicon mould of my sculpt to speed up the process, how to smooth and refine my design and make it into what I had envisaged in the first place. I also learned that my idea of making a thing in a week was totally underestimating the time involved. I could have spent another couple of weeks on the sculpt, but I had a deadline and it was time to move onto the next department.

Rob Skene runs the moulding department and took me through the process of making a mould. I brushed silicone, made a plaster jacket and learned all about the importance of registration keys. This process took a couple of days and I would never have got my head around it if I hadn’t had the guidance and access to the materials. Now if I need to do this, I know what to buy, how much to buy and what steps are critical.

With plaster mould in hand, it was onto the casting room, where Brian Stendebach offered to mix up the resin compounds and pour the cast. I was very happy to hand this part over to the expert as it takes speed, agility and know how. I watched, fascinated as the mould was filled, layer by layer and left to set. When it was de-moulded, there, looking fantastic was my shoe! Almost. Now it needed finishing.

The finishing room is headed by Marco Wuest who set me up at a desk fitted with an extraction fan- very important when finely sanding your mould to paintable smoothness. I realised then, what work I could have done on the plasticine sculpt before I made a mould to make this process faster. After a full day with grit and dremels, it was time to go paint a shoe!

Jules German set me up in the paint room and introduced me to super-fast drying spray paints, more extraction booths and the marvels of gold foil. Paint is my thing and I thought I knew everything about it, but I learned more. I also had a nosy at the work they were doing for a film and got some good tips on making multiple stencils. Richard popped by and I took the opportunity to have him sign the shoe base with gold pen, alongside my name.

And then, all too soon, my time at Weta Workshop was over. I had a photo by the weapons wall, one last flat white, goodbye hugs, handed in my fob and walked out the door with new skills and a giant beautiful shoe that took around 150 hours to create. It’s one in a limited edition of two, the second is a blank cast, just for me. Then we broke the mould.

‘Flourish’ will go up for public auction soon, all proceeds will go to Dress For Success to further their fantastic work. And unlike Banksy, we won’t destroy it when the hammer falls.