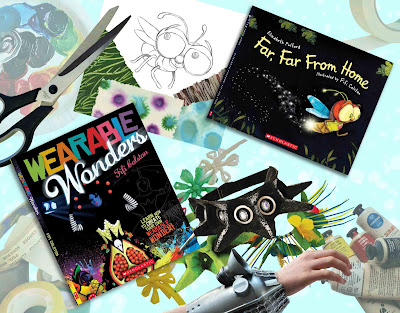 I've got a few workshops coming up in the July School Holidays so thought I'd let you know about them here as well as on my facebook page.

Firstly in Wellington with CapitalE.


Award winning WoW designer and TV presenter Fifi Colston will be running 4 special workshops for us this July Holidays. Learn how to design and make some special wearable art. The workshops will be run to coincide with the publication of her new book Wearable Wonders. Where: Museum of Wellington City & Sea and Carter Observatory Dates: MoWCaS  Mon 15 July or Carter Fri 19 July Age: 8 - 14yrs Times: 10.30am - 1pm/2pm - 4.30pm Price: $25 (includes all materials)
BOOK HERE

and then in Christchurch for Kidsfest


Create exciting textures from paint and paper with Fifi Colston, writer, illustrator and TV presenter. Fifi shows you how she did the illustrations for 'Far Far From Home' and will guide you through making an artwork of your own.


Paint, glue & tape time - make a wearable art piece. Fifi Colston writer, illustrator and Wearable Art Designer will help you create your very own WOW garment. Be it a helmet, skirt or crazy arm decorations, you can use a favourite book character as your inspiration.

Plus I'll be running workshops for The New Zealand Post Children's Book Award Festival this Monday and Tuesday for selected, participating schools- we'll be making fun art to celebrate Ned Barraud and Gillian Chandler's wonderful shortlisted book 'At The Beach'.
Then I'm off to St Peter and Paul's School to give a talk on Wearable Art and hopefully inspire the students to come up with wonderful ideas.


And on Sunday 23rd- look out for a fun craft I'll be making from my new book on What Now.

Gosh, busy...love it that way!

Posted by Fifi Colston at 4:05 pm No comments: 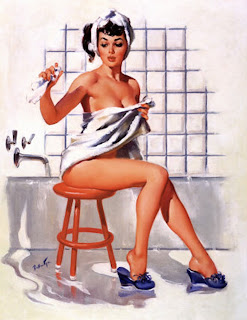 I'm making up for not blogging for ages with a REALLY long post  :)

"There's mould around the plug hole"

Parting shot from husband as he emerges from the ensuite wearing his usual Sunday morning attire- a wetsuit.
"That'll be because no-one has cleaned it for 4 weeks," say I, thereby implying that somebody should and it shouldn't be me.
"I cleaned the loo last time," he says pulling the rubber up over his arms. I know this means liberal amounts of pine scented cleaner squirted around the bowl and an industrial strength scrubbing with a sad looking brush from which most bristles are missing. The surrounding areas of seat, lid and that particularly nasty bit at the back where pee mingles with  pubes and the whole thing looks like a snapshot from the Young Ones, is not addressed.
"Do me up," he says.
The zipping up of the wetsuit is a Sunday morning ritual. I am usually awoken from a dream where Daniel Craig is offering me the opportunity of a lifetime by the words "I'm ready."  This gets confused in my sleepy state and groping for my glasses, I arise unclothed to the man dressed as a seal before me. It is not Daniel. I am always slightly disappointed, as he would be when confronted with a middle aged woman clad only in eyewear and sporting a bad case of bed hair. Unless he was 75, in which case I'd be an alluring bit of early morning crumpet.  I zip up my husband and wonder briefly what he'd do without me.  I like to think he is just testing to see if I am still alive.

The cleaning of the bathroom is something that I feel should just happen by itself. If it gets filthy enough surely it will start to shed the dirt like snake and it's skin, leaving just a trail of scales that can be brushed away into a handy dustpan, leaving a shiny new surface glistening in the morning sun. I've always thought I was cut out for something better; that I shall never be famous for white tile grout. For a while when we were feeling flush, if you'll excuse the bathroom pun, I paid someone to do it. Despite the feeling that I was born to higher things in life (though coming from distinctly British working class roots I have no idea why) the sparkling tiles made me feel guilty and like a complete twat for  'having a cleaner'. Like I was somehow superior. I wonder if Lady Gaga ever feels like that? It's a pretty safe bet that she doesn't scrub the dunny herself, but if she did she'd work it into a video with fabulous costumes and a bevy of hot boys in tow. I might be more inclined if that was the case.

After lengthy internal debates with myself over a cup of tea in bed, about the unfairness of it being 'my turn' to get out the Spray'n Wipe (I lose my own argument due to husband having mown the lawns, done the washing and the vacuuming as well as cleaning the rangehood), I face the task at hand. All I really want to do is have a long shower, now that the water restrictions are less imperative, and think about who to hit up next for work, or about the lemon curd tart in the fridge which I hope nobody has eaten. Instead, the sink fungus beckons. I scrabble about for scouring agents, glass cleaners, cloths, scrubbers and Exit Mould.  I know in my heart that all you need is white vinegar and baking soda, but I feel better armed with environmental pollutants.

There is a collection of bench clutter to deal with. All the glossy mags showing exquisite bathrooms do not have people using them. How can they? Where for instance are the half used tubes of cold sore ointment, moisturisers, dental floss, shaving cream and painkillers? Or the hair product that never works except at the hairdressers where you shelled out $40 for it because it made you look like Helen Mirren at the Academy Awards. There is the electric toothbrush that collects layers of yellowed plaque around its base, a magnifying mirror that zooms into blackheads like a forensic investigation computer programme, and a jar of sheep fat which I am told is lanolin for wetsuit chafing avoidance. My husband smells like an old ram on a Sunday morning. I worry that sharks will get a taste for mutton.

The bathroom floor itself is small in area with underfloor heating which I refuse to let the family turn on except for one month in July which coincides with my birthday. I feel that the outrageous power bill resulting is in lieu of a present. Even from a distance the dust and hair on the floor is visible. Where did the dust come from? I'm not an old lady with Lily of the Valley talcum powder. The hair is definitely not mine. I shave my armpits and have only one small other patch left to shed. Which leaves either my furry chested husband or a visiting werewolf the culprit. I feel like Nicole Kidman in 'Fur' playing Diane Arbus with a blocked drain courtesy of her hirsute neighbour.

Then there is the shower. The best way to clean it is whilst you are in there. Naked. This way you don't get your clothes wet and you can wash the cleaning agents  off yourself at the same time. I wonder if Hitchcock's wife  wrote that scene in Psycho? It might have been her turn to clean the shower. I have tried many and various products that promise miracles without scrubbing. They lie. Stabbing is too good for them. The only way they work successfully is if you use them without your glasses so you cannot see the result. Wearing glasses in the shower is pointless due to the steam, and if Daniel Craig DID happen to drop in, you wouldn't be able to see him before he copped a look at you with your fogged up goggles and anti bacterial sponge.  I may be the only woman in New Zealand who puts contact lenses in only to clean the shower. This has the unwanted benefit of being able to look down at yourself with clear vision and get distracted by scouring the flaky skin on your legs instead of the tiles. This is best done with body exfoliation gloves.

I've found that hands and knees are the trick. Get down on them with the gloves on your hands and deal to the shower floor. As I'm doing this, it occurs to me if I had a video camera I could film it. There are people who would pay good money to see this kind of thing. I could set up a pay for site called 'Scrubbers' , or Youtube clips.  They would go viral and I could monetise the 3 billion views. Then I could pay for someone to clean the bathroom for me and I'd get over feeling spoilt.

I leave the shower and bathroom in my excitement to search out recording equipment on Trademe. The plug hole still has mould around it.