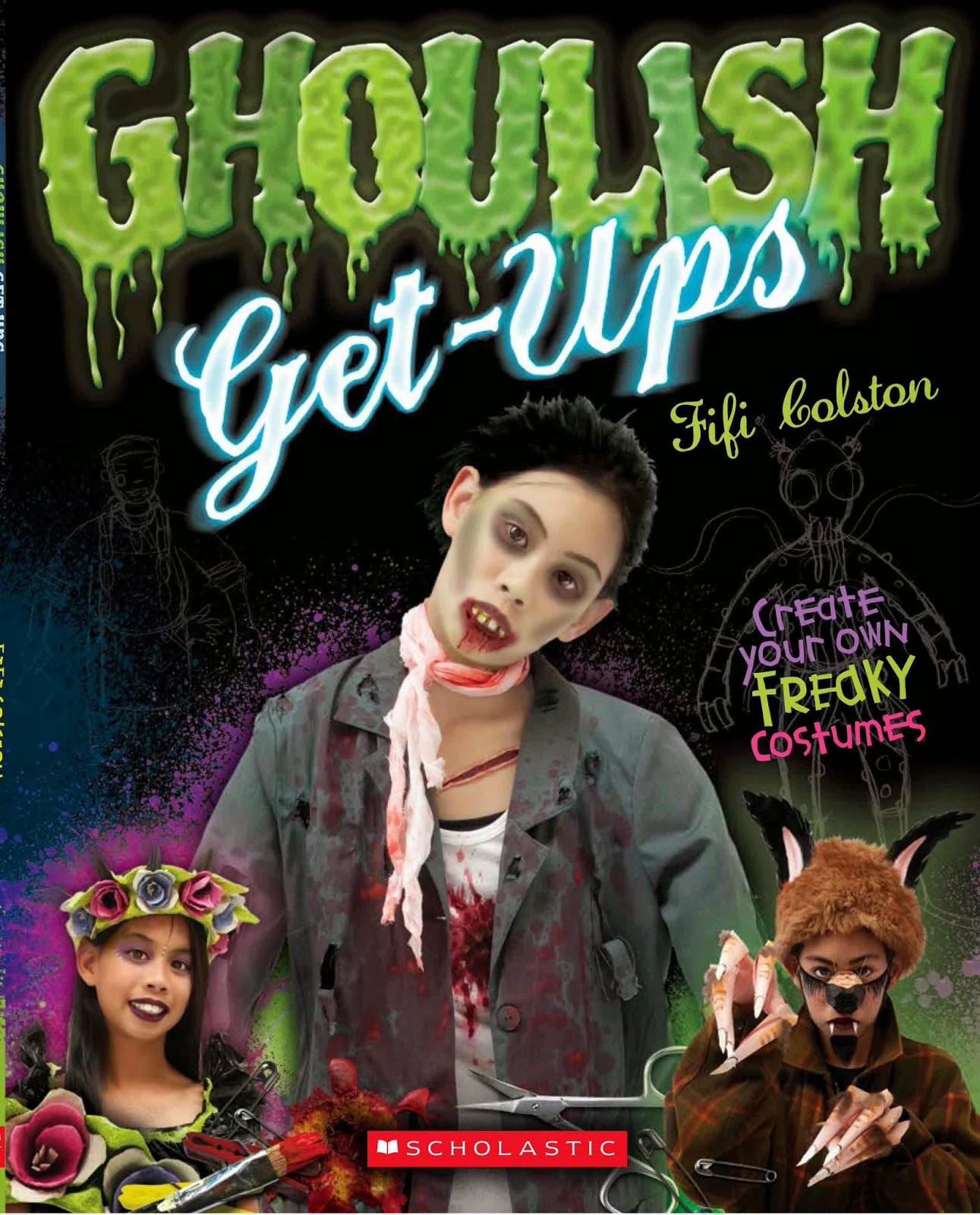 Well yes, this a blatant plug for my new book, Ghoulish Get Ups published by Scholastic. Create your own freaky costumes on the smell of a (clean) recyling rag. I'm pretty proud of it and I think you will find it extremely useful in the lead up to the freakiest night of October!

I LOVE making things and actually, surprise surprise, so do kids! There is so much to be learned in the process of cutting, pasting, glueing, sewing and painting. But don't worry- this book is not about dragging out the sewing machine- not at all! Safety pins and double sided tape hold these costumes together. And the book is jam packed full of excellent tips and tricks to create makeup and prosthetics to match your outfits!

This is what people have to say about the book (all good!)

'Fifi Colston is the Jamie Oliver of the costume world. Give her a cupboard of recycling and art supplies, or even a bag of them, and she is certain to come up with something incredible-looking, at pretty well zero cost. This book, which is the second of its kin after the bestselling, award-winning Wearable Wonders, has truly got something for everybody....' (see more here)

'...That's the beauty of this book - there's nothing expensive you need to buy. Fifi gives you tips on how to make 16 different outfits including elves, fairies, punk rockers, vampires, zombies, murderous butchers, aliens and creatures. If those costumes don't appeal Fifi shows you how to turn recycled objects such as egg cartons, paper bags, sheets, t-shirts, pants and tights into numerous outfits. She also gives tips on how to transform your face, hands, feet, ears, hair, and how to make wings, foundation, warts, boils, facial hair, guts and broken bones, wounds, stumps and bumps, and horns.  She even gives recipes for ghoulish food such as zombie fingers, and eyeballs... (read the rest here)

Available in all good bookstores and online at Fishpond and Wheelers 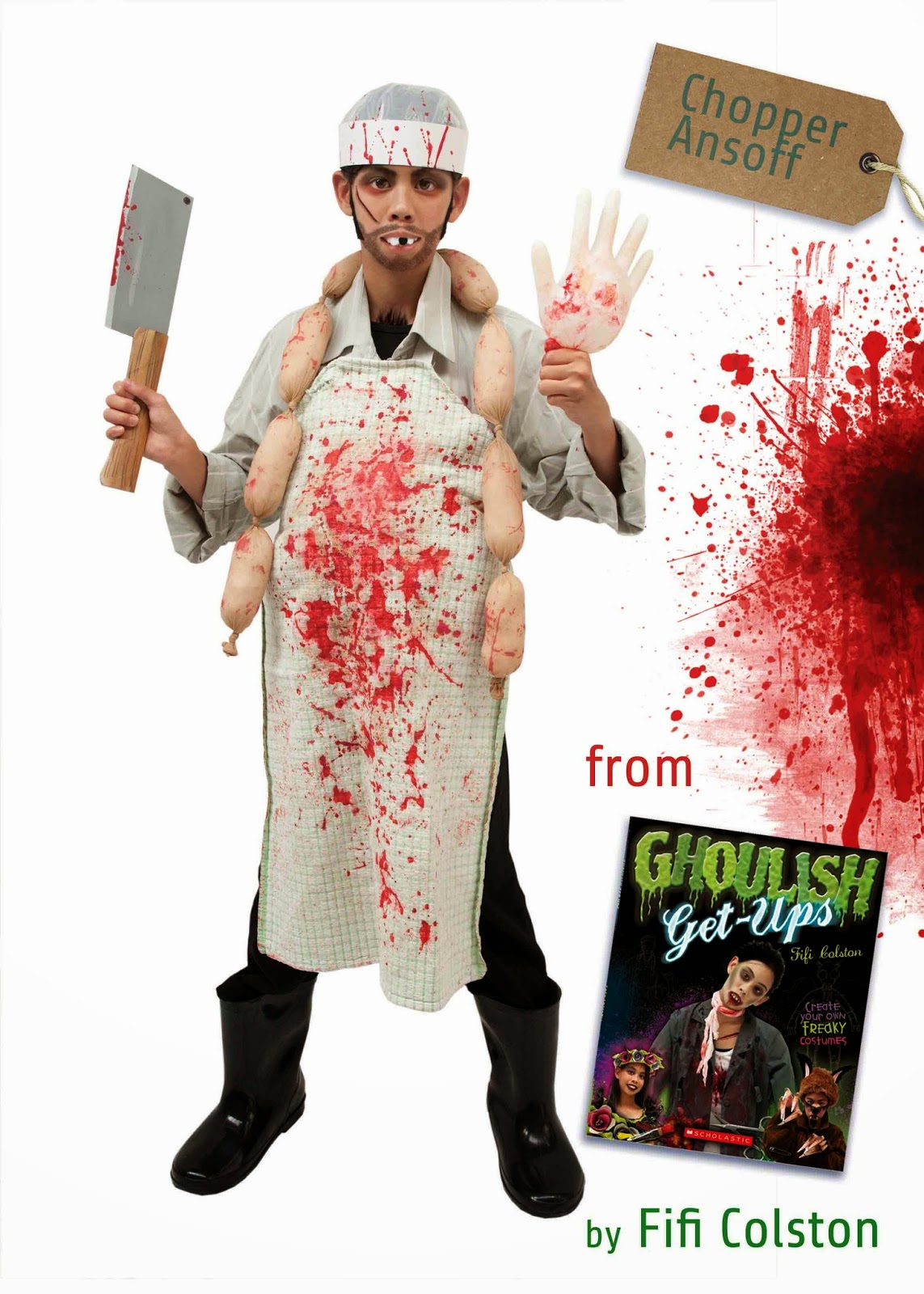 100 Days Project, and what I learned in the process...

October and life goes on...I managed to complete my 100 days Project and for those of you who don't know what that is, it's where you register to commit to completing a creative endeavor on a theme once a day for 100 Days. Here is more about it

Here is a summation of what I did as it appears on my artist card at re.Space gallery in Victoria Street. The exhibition of 100 Days artists is on until Sunday 26th October.

You can see my project here- click on each picture for a description :)


Project Title: Take it on the Chin

Project Description: Create 100 half face images in the style of different artists and illustrators. The aim is to explore the work and technique of the masters and see what I learn. I will alternate male and female faces in each artist's medium.

What is it about the project that appealed to you? Eyes usually are the most expressive part of a face but I liked the idea of a half mask, but the half that usually gets forgotten

What changes (if any) has the project helped bring about for you? That not reaching a deadline isn't the end of the world and I maybe I am more human because of that.

Best thing/s about 100 Days: Posting them and enjoying other's reactions to them

Worst thing/s about 100 Days: Realising I am so far behind I might never catch up!

Can you share a moment of insight (about the creative process, or something personal about your experience of the project)? during the last stages of the project, my father became ill and then died. I spent much time with him and my mother out of town, and took my 100 Days with me to do in the evenings. I found I couldn't work easily in a state of grief and my drawing and painting which is usually my solace went on hold as I tried to process his decline. This is new for me. It appears that the death of someone so loved was more important than me being 'clever'. I couldn't get to my happy place.

What was a favourite day or moment? In a moment of disillusionment I asked on Facebook why I should even bother with my art and this is one response from a father: 'One of the purposes or perhaps results of your being able to draw is that a ten year old girl in Sydney is given an excellent example of how to be a woman in the modern world. She delights in your additions to your 100 chins exercise getting pleasure from the styles she recognises and learning from the ones she doesn't. She also learns when they don't come through every day. They might not be making money but they are making the world a better place.'  This alone made me carry on and catch up.

How many times did you consider giving up? Many times after my dad died, I wrestled with this and decided be kind to myself and do a simple digital homage to him and my mother

If you could pass on one piece of advice to someone considering doing this project it would be: Don't worry about the outcome- it is what it is. 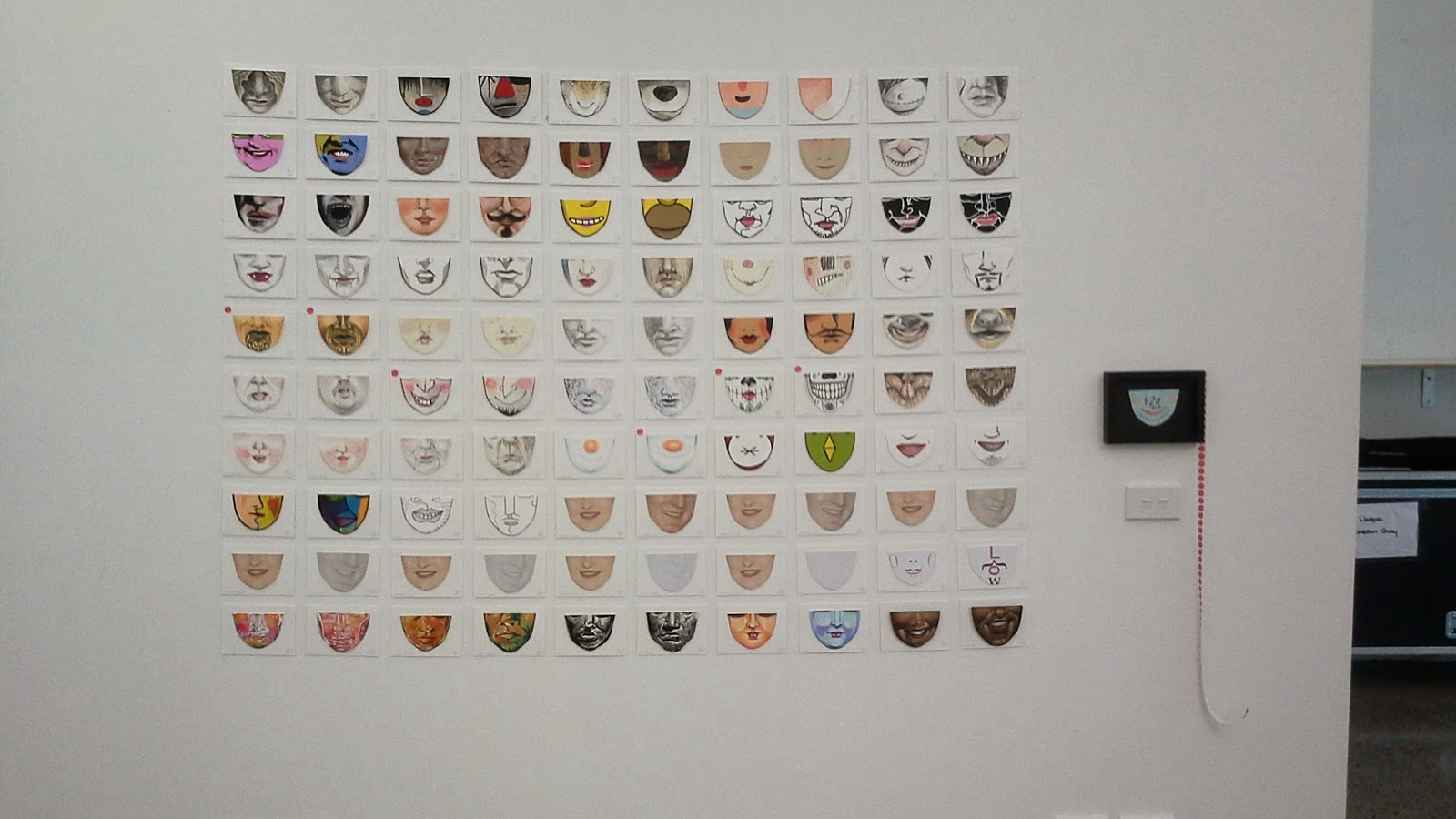 
September has been a month I tell you...

One month ago today, I rushed to our father's hospital room and a week ago he died.

In amongst all of that was The World of WearableArt. Normally each year I blog, facebook and tweet about WOW because I have something in show and I am generally asked to speak or give an interview about it all. This year was different. A few months ago I got asked to do a corporate gig for the opening night at a private function but turned it down for a variety of reasons. I'm no psychic, but I'm so glad I had said no, because two months later, that was the night the nurse from the hospice called and said 'If you want to gather family now, this is a good time.' At that stage he had maybe a couple of days to live, and 400 hundred miles between us. There is no way I could have talked chattily and inspirationally about my work that night. The following night, the awards night, whilst my sister held his hand in the hospice, I watched the show with, my phone tucked down my bra, barely seeing the wonders before me, waiting for 'the call'.

In the days that followed, I had time to reflect upon my father's decline, life and art. At his funeral, family paid tribute to this man we all loved so much and as always happens at such an event, people said 'I never knew that about him,' as past history of a life well lived comes together in the memories of those who knew a person at different stages of their lives.

In the hospital and the hospice that followed, he was shrunken and incoherent; a frail shell of the man he had once been. To an onlooker- just another wrinkled dying 83 year old man. But to us, he had been so much more. He had done stuff, he stood for something, he had a story and a presence and years of work and goddammit, investment in life. He affected people and the effect on us was remarkable.

Later, someone asked me about my WOW entries and I barely had the energy to think about them. They wanted to know how long it took, what they were made out of, was I excited about the show and all the usual curiosity. I tiredly showed them pictures and explained the process and then, the backstory... and they were amazed. These were not just fancy costumes; they had a reason to be.
And it occurred to me that my wearable art pieces were kind of like my father. On the outside, just something to observe - with little understanding of what was inside; what made up the whole, what the history was. Because story is everything. Without it, there is just wallpaper, or the husk of a person with no empathy or meaning.

And my art means a lot to me. I'd like you to understand it too. So here it is, explained. And if you like either of them, you can vote for People Choice http://www.includeme.co.nz/fairfax-media/wow-people's-choice

Firstly 'Mighty Acorns' - not so much to say about this except that little people are nurtured from breast milk and so become strong. I chose to make my babies into elfin folk. The acorns were made out of plastic bowls with felt detail and Fimo nipples. The babies were dolls I repurposed with new ears, colour and clothing.


And then, then there is this:

Whilst in Samoa last year we went and saw the lava fields on Savaii, and I was awed by the forms and the history:

In 1905, Mt Matavanu's lava poured through the London Missionary Church of Saleaula, Samoa

The 1905 lava fields of Savaii are a moonscape of textural delights. Through tunnel like tubes, which now house moss and tiny cave swallows, lava continued down and right through the London Missionary Church, in Saleaula capturing the arches and walls forever in volcanic rock. The lava poured down to the sea; along the molten journey was the Virgin's Grave; a girl buried some years before. A bubble formed over the tomb and created a natural cave. Spared from the mountain's outpour, the grave became a holy shrine, and the only place that seems to grow flowers in the whole barren field.
Made from 30 meters of plastic backed painters drop cloth felt from Bunnings, my most  ironic moment was painting the fabric with a spray gun.
I made the archway from MDF board, and carved Styrofoam. It attached to a custom made trolley with castors. The basis of the corset was made at a specialist corset making class the previous year and I made the palm fronds from painted fabric- it took me ages to get the plaiting right. I handmade the shirt from sheer fabric and satin and all the other components were made from the painters drop felt with other details- like the cave swallows. LEDs lit up the front 'lava tube' and a light in the virgins cave at the back.

It took me months and left me with terrible OOS. My finger is clawed every morning and I have to heat it to make it work again. And work it will, because doing this stuff gives me joy.
'Talofa Lava' was one of the best pieces I have ever achieved and I'm pretty proud of that. Next year will be my 20th year of entering with the 23rd piece.  I have an idea for it, and it has plenty to do with those final days of my father's life. When I have finished it, don't say 'good luck, hope you win' because that's not why I did it. Say instead 'What is the story?' Look beyond the materials and the glamour of showtime. Beyond the facade. Look for my father. He will be there.