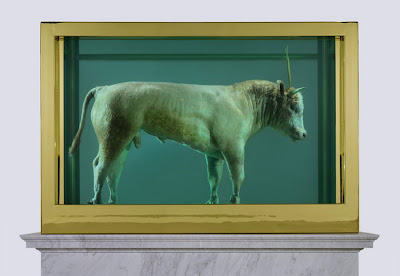 
The news that Damien Hirst's ‘The Golden Calf’ was up for auction and consequently sold for £9.2 million to a telephone bidder at Sotheby's, coincided with the call for entries for Page & Blackmore’s Short Story Sandwich competition. The rules were simple:

Write a short story with the following as your first sentence as written by Emily Perkins: The smell was overpowering. …and conclude with this last sentence contributed by Joe Bennett: Dear Stella. Don’t forget to include your kiwi food item in your story Maximum word length = 1000 words

What fun! I thought I’d give it a go and this is what I came up with. Obviously I wasn’t the winner, but I often think of this blog as a Second Life for writing that never got to print and used illustrations that I can’t afford to frame. My effort isn’t likely to make the Six Pack, but if you make a cup of tea and sit down with it, it may just entertain you as much as it did me in the writing of it.

I did start out with a woman sitting in a café, but, Dear Stella, it all went another way when Hirst put his calf up for sale and my character took over the story…

The smell was overpowering, it completely drove me out. The poisoned rat in the roof; I can’t create another thing until it goes! You have to understand Stella that my art needs solitude and brevity and aesthetic to happen. Not rotting corpses. I should never have fed it all that bait but it was feasting on my creation as fast as I was making it and turning it in to crap. It was me or the rat. At the moment, the rodent is winning. I should have put up with the droppings. Have you ever inspected them close up? They looked like henbane seeds. Fabulous narcotic properties; drops one in an instant. The henbane, not the droppings.

I’m losing track of how many days I’ve been here, except that the bach has ponged for at least four, so I’ve escaped to the nearest café. Five kilometres down the road. There are only two to choose from and very hard to gauge from the exterior which might serve an approximation of an espresso. Both have net curtains and dim interiors, so I went for the ‘Du Pop Inn’.

I immediately regretted walking in the front door and pretended to look at bottles of water in the chiller until I saw that there was indeed a flat white on the menu board not that dreaded filter coffee, so I’ve taken a gamble and passed over $3.50 and stroked the cat which has now knitted itself around my trousers. The wrinkled old gargoyle manning the counter is all smiles now; nothing like brisk trade and cat appreciation to break down barriers. I was just about to turn away when I saw the lamingtons and you sprang to mind again.

Oh God, the coffee is awful after all. Milky and lukewarm; soy isn’t even an option here. Damn. The lamington looks digestible though and it’s sitting here on a very collectable Crown Lynn plate. I wonder if I can slip it into my pocket? Not the lamington; I’ll eat that. This one’s not made from foam rubber or covered in pink paint. Oh how you laughed when I bit into the jam and coconut you’d rolled it in. My jaws sprang back immediately; I couldn’t understand it. Thought my teeth had lost their edge. The paint was only a teeny bit toxic; I recovered eventually didn’t I? You were so full of pranks my dear; I never knew if I’d be brushing my teeth with haemorrhoid cream or finding a kipper in my dress shoe. The day you painted over my latest canvas with test pots and said you were dragging me into postmodernism was a hoot.

I like to think you contributed to my art in a positive way; because without you, there would be no ‘big idea’. This one’s a real winner. I resisted applying for funding; I didn’t think the panel would get the concept, even if I pointed them to Hirst. His Golden Calf has been quite an influence. I don’t expect this piece will sell for millions of pounds; in fact, I don’t plan to sell it at all. You’re such an integral part of the thing; it would be hard to part company with it. I want to have it installed and stare at it for hours. It’s my magnum opus. My homage to you; you had such fun with me. Such a tease; every time I look at my work in progress, I have to grin.

Laugh? I virtually split my sides when you announced you were leaving. With the contents of the house. You were quite right, failing artists earn diddly squat and that property developer; well yes, I can see how you were attracted. It was nice that you let me stay in the bach; for my work. Pity he put it on the market last week. Nice you came down to see what you could take with you. Pity we fought over the . I thought you were going to tear it in two for a horrible moment. It was more than I could bear and well, yes, I reacted badly. I’ll admit that.

My stomach is churning at the memory, or perhaps it’s the coffee. I really don’t think I can eat this lamington after all; I’ve completely lost my appetite. Its just the smell in my nostrils won’t go away. Bloody rat. I should have grabbed it, squeezed it, trussed it up, fitted it with golden feet and pickled it in the formaldehyde too. Dear Stella.

Because you liked the last ones so much... 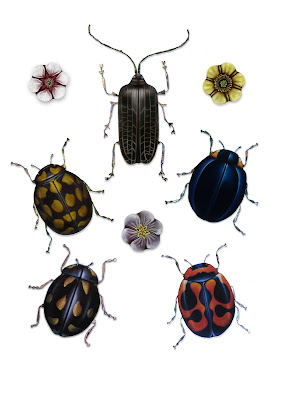 ... here are some bugs and blossoms; the Huhu beetles were snapped up before they'd barely had a chance to crawl up the wall! Click on the pic for a better view.
Posted by Fifi Colston at 10:55 pm 2 comments:

As requested by Bookgirl, here are some of my velvet birds from the Velvet Resurrection show.
Each one is a clear cut from 5mm MDf board, covered with stretch velvet, backed with hand stitched black felt and painted with airbrushed and brushed acrylic. They measuring 60cm from beak to tail with legs made from foiled copper wire. I am working on a new exhibition for the 8th December 2008 at the Deluxe cafe in Wellington. Called 'Velvet Honeys', it features birds of a different variety, designed to tickle your nostalgic senses. 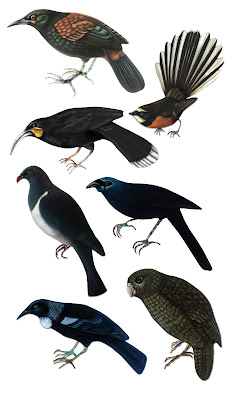 A whole new lease on my artistic life

Well, tired of working off my kitchen table and having the teen aged son make comments about women in the kitchen (just to rile me), and having suffered the longest dreariest winter in recent history, and completely had enough of waiting for the work to come to me…I can now report that I have done just what my horoscope advised; taken a lease on a studio in town. Not just a studio, as in a room somewhere sharing with a bunch of others, but a whole house! Well a small house- a two roomed cottage type of thing in the in Mt Cook. From there I can run art workshops for kids and adults, illustrate whatever needs my touch, write, blog and create Wearable Art. And the best thing is I have free parking so I can rock up to the door, unload my recyclables ready for transformation into art and craft and won’t have to catch the bus. If you have been following my posts, and understand my feelings about the bus service in , you will realise just what a relief that is to me! I will be putting in a link to a new blog about forthcoming workshops in due course. So, keep an eye out. In the meantime, thanks to Google Earth and the Wellington City Council, here’s an aerial shot of where I will be from Labour Weekend. Just me, the tuis warbling in the greenbelt and a whole bunch of other artists working in the village. 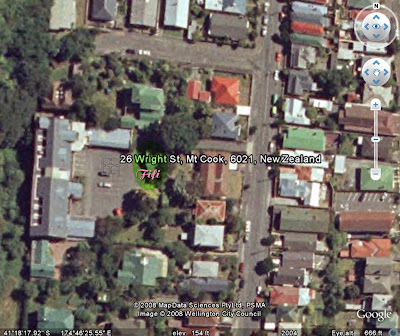