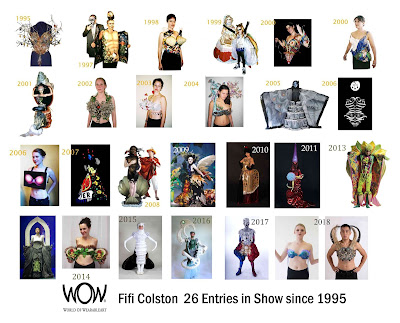 I've been entering the WOW Award Show since 1995 now and it is probably fair to say I am completely addicted to making a garment each year. Here are entries I've have done over the years. I run workshops on Wearable Art for teachers, students and individuals, so if you are interested in knowing more just e-mail me.

See them all close up in my Facebook portfolio

Garments purchased by The WOW Trust including Kunugi Kodama and Vena Immaculata have been exhibited at various times in the WOW Museum in Nelson.
Persephone in Cuba Street and Lady Curiosity featured in the 2 year nationwide touring 'Off The Wall Exhibition'
Lady Curiosity is now touring in the National and International Exhibition  WOW and Workshop-e