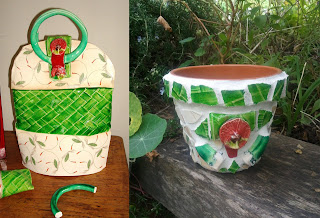 So, one month ago tomorrow, I did some fun artwork on the Good Morning Show with Brendon Pongia. We had a few laughs, made some poured acrylic paintings and I tootled off to have some lunch and think about my book illustration project in the afternoon. Then I got a text from a friend to say Christchurch had been hit by a massive quake and all my plans went out the window. The past month has been distracting to say the least; worrying about friends and family, glued to facebook and the news media...
But at some point we have to pick up and get on with things; my book illustration job is underway, family have gone back to Christchurch to mend their broken houses and jobs and queue for coffee (now is a very good time to have a mobile coffee cart in Canterbury from all reports). And friends are wondering what to do with their precious possessions that are ‘munted’ (now a Christchurch colloquialism).
A very fine Christchurch illustrator friend, Jenny Cooper, had a good idea.
‘Don't chuck out your broken plates! Christchurch needs them! Let's all keep our precious broken plates, mugs, jugs, vases, tiles..... anything that was beautiful and has a memory attached..... if we pop them in a box and tuck it away in the garage, in 6 months we can organise a memorial mosaic sculpture, perhaps in the Botanic gardens. Perhaps craft people and mosaic specialists will help, and we can re-use these lovely irreplaceable old bits of china, maybe build some benches or a garden, think of how lovely The Giant's House in Akaroa is. Have spoken to a City Council Member who says yes go for it, please repost this to everyone in Christchurch who might be interested.... it might not happen overnight, but it will happen!’
I like good ideas, so I thought I’d get the ball rolling (or the plates as it were) by making something from a piece of cracked ceramic ware on The Good Morning Show on Tuesday 22nd March at 9.30am.
Jenny sent me her smashed Katie Gold handbag pieces carefully packaged in bubble wrap to which I then took a hammer (sorry Katie- I was very respectful about it) and created the flower pot you see here. I’m no expert mosaic artist and am learning as I go; there is enough of the broken ceramic to make three small pots looking ‘same same but different.' By the time I’ve finished the third one I’ll be far more useful to the project Jenny is proposing for Christchurch. In 6 months time I’d like to go down there and be a part of creating a public artwork with anyone else keen to be involved. If you have broken china, we have a place to store it, just email me for the details.
We’ll be looking for sponsors to help with this by way of materials; tile adhesive, grout etc (btw...the fabulous Bunnings donated me the materials for my flower pot) And like all good ideas, we figure this will just evolve creatively and purposefully until it becomes a beautiful and functional reality. Just like the rebuilding of Christchurch :) 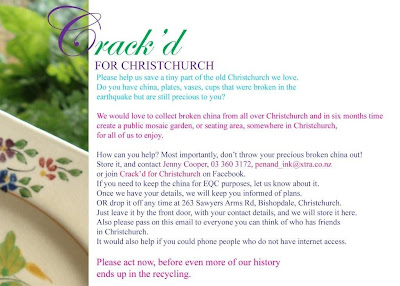 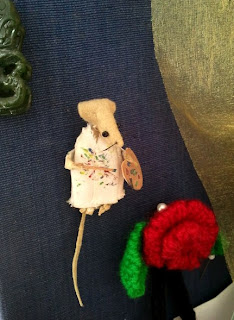 I’ve been wondering what on earth to write about since 22/2/11 (note that the numbers are all 2’s and this was the second destructive quake...sorry, part of me leans towards superstition and fate). There has been a lot to absorb and some extraordinary feats of courage...and fundraising going on during this time.
I had lunch with a Christchurch friend today, temporarily exiled to Wellington until her work premises is made safe, who admired my NZ hearts ChCh tee shirt and said she’d buy one. I said she should be given an ‘I got out alive’ one for free. She said since she’s been in Wellington she’s been dragged along to every fundraiser and charity dinner and spent a fortune essentially donating to herself.
For myself, I’ve given to the Red Cross, the Salvation Army, I’ve bought the tee shirt, I’ve sent care packages to friends to cheer them up, I’ve lent my car and house to evacuees (ok friends and relatives but still in need of a funk hole) and I have followed on facebook all the initiatives to raise money for Christchurch.
But I stopped short of donating my work to Trademe.
Why would I do this? After all, I have piles of it sitting around at home in boxes being eaten by silverfish.
The reason is this. In good times it’s very hard to get the public to buy art, unless you are a name artist and even then it’s not that simple. Trademe is littered with artworks; some good, some very good and some would be much better kept in the portaloo. For the good and very good artist there is nothing worse than seeing your passion sell for your $1 reserve and find it costs you more to ship it than you anticipated. There is a now a flood of fabulous work donated by fabulous artists and crafts people and managed by tireless co-ordinators for the Christchurch Appeal. You can buy anything nice for a bargain basement price. It’s like the $2 Shop but with talent and class. But there’s something about getting art really cheap. It is never appreciated in the same way as saving up your next three years disposable income for a Shane Cotton would be. I suspect that’s why the trade is a bit slow. Artworks I have given away to people often ends up in their batches, to rot with sea salt. They don't know what to do with it when it's free.
I have been an artist since I was a tiny little girl. I have never wanted to be anything else. The tiny mouse in the photo was one I made when I was 11. There was a fad for them in gift shops at the time and I cunningly sketched one whilst loitering and looking like a young shoplifter, then went home and made a pattern for it. I turned out my entire family in mice. My older sister was getting married, so I made a bride and groom set. My other sister was into tramping so I made one with a backpack, tramping boots and iceaxe, posed on a rock. My mother was a little cuddly matron mouse, crotcheting a rug (I fashioned a weeny one with a bent pin) and my father mouse was dressed in waders and holding a fly fishing rod. I gave them all as presents. Me of course, the artist mouse I kept, because I knew this was my future and nothing would make me happier than to live into it. None of my family still have theirs (note to whanau: feel free to contradict me here). I rest my case.
So, years later, still basically on the income of my prophetic little effigy, I won’t give my art away to help people; because it won’t raise nearly enough money for the very large hole left by the earthquake.
Neither will cutting benefits, subsidies and student allowances. And Prince William is darling, but is saving up for his wedding, so we can’t rely on the monarchy to bail us out.
No, I think the answer lies in Charlie Sheen; the man with Adonis DNA. We should invite him over. He could have a large, last party, and our wonderful student army could go in and shovel the excess cocaine off the porn star’s backs and sell it on. I think that would about cover it.
Posted by Fifi Colston at 4:41 pm 3 comments: