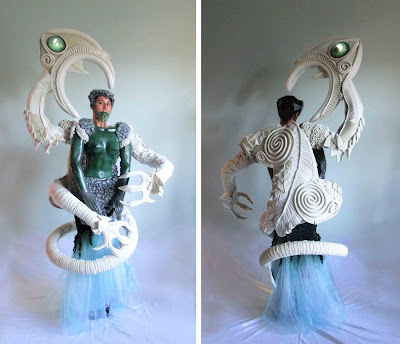 The World of WearableArt 2016 season is upon us- and what a spectacular show, once again.
The award night was last night and whilst I didn't win anything, I was honoured to be in such a stellar line up of creations- plus I got to hug the totally gorgeous, terrifically talented and sweet Reuben Paterson on whose work, the show's aesthetic has been based. He said he liked my manaia and that I will hug to my creative heart :)

So here it is, my creation and how it came about.

Poutini the taniwha captured beautiful Waitaiki, laid her down in the bed of the Arahura River and turned her into pounamu before fleeing to the sea.

I was intolerably homesick when we lived in Britain for a while.
A New Zealand friend came to visit and bought with her a piece of Ngāi Tahu pounamu. I wore it every day until we returned; it is my own taonga.
I wondered at the Maori mythology behind the West Coast greenstone and found an intriguing tale of misplaced love and abduction; how Waitaiki became the mother lode of all pounamu in the Arahura River.
I wanted to animate the story and create a manaia inspired by Maori bone carvings, that moved and swayed and held his captive tight.
This is essentially a giant puppet- with the models real arms in the head and the arm of the taniwha.

You can see how I made it on my facebook page here and if you like it, you can also vote for it here  at The Breeze and be in to win something too! They say you just need 1000 true fans to make it in the creative world- I'm currently sitting at about 999. You could make all the difference in the my world ;)

Posted by Fifi Colston at 6:35 pm No comments: