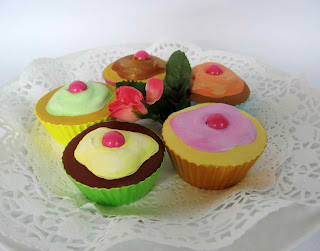 I have a need to tell you a tale; of my quest for Plaster of Paris. Yes that wonderful stuff with which to make castings of anything from bear prints (if you live in Canada) to cup cakes which I am making and selling at the next Craft 2.0 at the Dowse Gallery in June.
Having used up my supply which I bought some time ago at an outrageously inflated price in Masterton (where they had me over a barrel- I was doing a residency and I needed it NOW and local hardware store sensed my desperation) I set out to buy a bigger, more cost effective lot. It makes fiscal sense not to go to a craft shop or art store for this sort of purchase where you can pay a solid $10 for a piddly 1kg bag. So off to Mitre 10 in Lyall Bay my son and I went (because it’s close to us and he loves a hardware store) But… sacré bleu! there was none to be found on the shelves of New Zealand Biggest Hardware Men (come on, sing it with me).
‘We aren’t allowed to sell it’ said the not-very-big-at-all-man at the counter ‘because of its chemical constituents.’
This was news to me and indeed to my son who is somewhat of a 19 year old chemistry expert in anything that is illegal to make from common house and garden supplies. It had him foxed and wondering what in the plethora of fireworks he’s concocted in the past, he’d missed. Perhaps people snort it I said. He shook his head, ‘no, that would jam up your nasal septum’.
Undeterred, and unbelieving, we went to Placemakers. They had 2kg bags for $12, but I want to make hundreds of cupcakes and this would barely ice them. I mentioned Mitre 10’s reluctance to stock or sell it and they were scratching their heads. My son suggested that maybe our PM. John Key had accidentally poured some plaster down his toilet, blocked his drains and decided the nation should be more careful. One of the salesman thought that maybe the Finance Minister, Bill English wanted to get rid of art; after all, we artists are hardly going to raise the tax take. The other one thought that perhaps Mitre 10 just wanted to get rid of us so they could go and have their morning tea. They couldn’t help me out with a bigger bag, so off I went to the place we all go as seekers of knowledge and truth (also lies, gossip and dissemination) Google.
I found a site for art and craft supplies that provided big bags of plaster for a reasonable cost but you had to register with them before you could order. I did that and am still waiting. People who don’t maintain their websites are as irritating as people who sign up to facebook and never use it. What’s the point? Like having a cake in your pantry and never eating it (unless it’s a plaster one like mine). I then found that the same product was available from Winstones, so off I trawled to Petone. But they couldn’t sell it direct and I had to order it through Mitre 10. Do you see my dilemma? A 5kg bag would cost me $12, the same price as a 2kg bag and only $2 more than the 1kg bag. I had a sneaking suspicion that somewhere there is a Plaster Lord making huge amounts of profit from this white powder…
Later, over a glass of wine I spilled out my casting anguish to someone (can’t remember who; it was a big glass of wine) and they said ‘Why don’t you try the Plaster Warehouse in Thorndon Quay?’ Who would have thought there was such a thing? I slurred my thanks, and in the sober light of day called them up. And they are my heroes…a whopping 20kg bag for $15! This artist will survive after all, and her cupcakes might even make a tiny and delicious profit.
So what have I learned from this plaster purchase awareness week… to shop around? Let your fingers do the walking? Spend more time on the internet?
No. I have learned that drinking wine gets you plastered, a lot cheaper.
Posted by Fifi Colston at 11:04 pm

I loved, loved this. Went to read it aloud to hubby but the phone rang (the down side of him working from home)

posts like this deserve a wider audience (and payment)

I love your story and found myself alternately laughing or agreeing with EVERY WORD!
Thanks for sharing.
Tali Landsman

Well, I'll be darned fifi. What a 'plaster' of a story. My word. Was listening intentively and thinking yeah, there is a 'plaster' lord in thorndon of all places. Who would have thought?

So if I know anyone, wanting to find out more about 'plastering', and I don't mean walls and houses, then I know the referral came from you and will 'blurb' your interesting story.

However, it cost you more than $2 to shop around and that's what asking around is all about, especially if it's with a large glass of wine! Crack up.