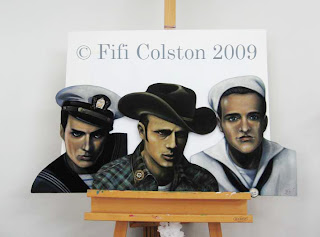 Here's a little preview of what I've been working on lately- some of the boys for my forthcoming velvet exhibition at the Deluxe Cafe on the 20th December. My inexpert photography and lighting doesn't really do them full justice- they are silky and smooth, and so very touchable...
From left to right they are:

Who doesn’t like the brooding sort in an officer’s hat?  If Clint Eastwood had been in the Navy, he might have looked a little like this perhaps. I swooned plenty whilst painting him; some people had to come and pick me up off my studio floor and revive me with gin. The hat badge is from the French Frigate ‘The EV. Henry’ which visited Wellington in 1977. A friend and I were invited aboard in a non ship girl way for dinner with the officers when we were 17. We dusted off our schoolgirl French and asked them what the ‘F’ word was en Francais. They replied ‘ A fait l’amore’. I knew then that all French sailors were fabulously romantic and completely honourable…

If you think he looks like James Dean in ‘Giant’, you might well be right. Poor boy, gone too soon… he should have had someone looking after him; like the girls at the nanny school I found his collar badge at. I was teaching them arts and crafts and found two of these cloisonné buttons in the useful box. They were far too vintage to be appreciated by my students, so I slid them into my pocket for some use in the future. That was 16 years ago. One is on my favourite jacket, and the other a reminder that cowboys are just rough lads that need taking in hand.

I was at Auckland Airport and to my delight in the queue were brand new naval recruits.  I’m not sure if a requirement of entry into the NZ Navy is perfect skin and lovely eyebrows, but all of these boys had them. I was particularly thrilled to have one sit beside me all the way to Wellington, and he must have been worn out from his duties, because he closed his eyes and slept whilst I appreciated him artistically. He reminded me of Montgomery Clift in his younger days, or Gene Kelly in ‘On the Town’ or a Pierre et Gilles icon. The little medallion was bought as a souvenir in Cyprus in 1963 by my father whilst he was in the armed services and my sister took it into exams with her for luck.

I have a selection of tattoos on velvet along with three other good looking icons to go on show- they are still being painted as I blog...so back to the easel for me today. Ciao!

Fifi is right, the lighting doesn't do them justice. I have seen them in the velvet and needed the gin I brought to stop myself swooning as well...
roll on the exhibition...

I love them Fi, and I especially like their stories and the little artifacts that are attached to them. You really have a light touch with a brush... ah now there's a by line for you...'A brush with velvet...'Bellisimo!

I love the title! I was wondering what to call the exhibition and that is perfect! A Brush With Velvet opens 20th Decemebr...