On the Truck with Charlie 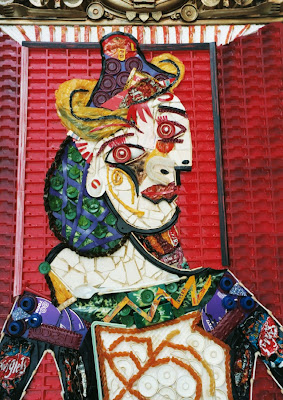 A comment from the blue recently posted on my blog, brought me back to the time I spent in Bristol 6 years ago as a volunteer at a fantastic recycling enterprise. I wrote this piece about it at the time on foolscap refill paper, filed it and promptly forgot about it. Charlie, getting in touch with me had me rifling through my filing cabinet and bookshelves this morning, and thanks heavens I am such a magpie, because there it was. So I have typed it and posted it to share with you all the truly gert concept that it is.
For one who loves to make silk purses from sows ears, I was as happy as a pig in mud…

I arrive at Welshback early, coffee in hand, my breath issuing forth in the English winter morning, like great billows of smoke. I could be a gargoyle, or a dragon; like the artfully made head that hung from the wall in the warehouse I now stand in front of.
I am there as a volunteer; a piece of flotsam from New Zealand, looking for paying work and finding none but in my creative desperation falling across what would become my find of the year. The Bristol Children’s Scrapstore www.childrensscrapstore.co.uk ; the Charity that makes practical use of scrap material for children's play activities. The ultimate useful box; my treasury of delight.

For anyone who has seen the possibility in an egg carton, a bottle top or discarded packaging, you will understand my excitement. From the age of 5, I have plagued my mother, and in turn as I grew, my husband and children with my bags and boxes of things that ‘might come in useful one day’. I blame my dear Scottish Aunty Isabel for this; a woman who bore two sons more interested in football than felt, she and I would spent hours cutting, sewing and gluing all manner of materials in the corner of her tiny Thornton lounge. My aunt is now 82, still working, still running craft classes, still making things to sell, still dancing. What a woman!

So back to my standing in the cold, clear morning outside the Scrapstore; my mission- to boldly go where (I think) no itinerant Kiwi had gone before; with Charlie to pick up clean industry waste for the warehouse. I clamber up into the truck, badly (there’s a knack to it as I soon learned through the many leaps in and out of the truck through the day) and we set off. There is a structure of sorts to the pick-up. Gathering factory and industry scrap works on a rota system; the businesses we would see that day were visited two weeks ago. The collection starts at one end of Bristol and follows a circular route, ending back at the store; we have an empty truck, waiting to be filled.

First stop, a printing firm with two pallets of corrugated cardboard, which are loaded with ease by ‘the boy’ who obviously relishes his forklift manoeuvres. He spins the machine around; practised and flamboyant. I eye the donation with glee; corrugated card is wonderful for construction; you can never have enough! Next stop, a food tech operation which makes flavourings. There is a pervasive smell of an indefinable substance; maybe cheese, but turns out to be tomato. It fills your nostrils unpleasantly- it might be better in sauce. The cheerful man in the white coat points us towards empty barrels; which are large and perfect for storing scrap in, unfortunately they also have irritation warnings on them in large orange stickers. Regretfully we leave them behind as contravening Health and Safety regulations are not on our list of things to do today. We move on.

Charlie talks about his first pick up which had started as mundane until he spotted a medical supply company and risked a cold call.
“It’s that lucky strike you always look out for; like a jackpot win.”
In this case, he was directed to two large shelves which, amongst other useful bottles and containers, housed a surprising number of unworn white canvas surgical theatre shoes.
These were swooped on with glee and the Scrapstore ran a ‘Decorate the Shoe’ competition to the great enjoyment of many schools and kids.

The next pick ups have the truck half filled with large circular cardboard cut-outs.
“I don’t know what people do with them, but they all go really quickly,” says Charlie. I can think of several, especially in the classroom. Big pie charts for maths, huge daisy flowers for science, bases for models of the Coliseum, or decorated with paper for pretend pizzas? Another packaging factory gives us cardboard tubes. I’ve used these myself to make rocket ships, desk tidies and mad dogs! The pet rat at my son’s after school care club snoozes in one regularly.

We call in at a cigarette packaging factory. No tobacco in sight; this place just makes the boxes. This is a print shop on an enormous scale; giant rolls of shiny silver card are piled high in the storeroom, each as big as a colossus. Mammoth machines spit out printed material but the whole place is as clean as an operating theatre, where you take your dirty lungs to be fixed. I try to imagine just how many packets are printed here and I cannot get my head around it. Smoking is obviously not a dying industry in Britain- except for the end consumer. Charlie is hopeful for the silver card, but there’s none left over today. Instead we help ourselves to the wooden spindles that come in the ends of the giant rolls. These make wonderful wooden stands for models. Some are plastic and look like Party Susan’s. You could almost give them a wash and serve nuts, dips and crisps in them.
A notice board industry gives us lovely bits of brushed acrylic felt type material and a lingerie manufacturer yields two enormous bags of silky off-cuts including a nice leopard skin print. I immediately see fierce jungle collages in the making.
A dodgy looking street in Bristol (one of many) with the yard next door housing baying hounds from hell, is the home of an unlikely enterprise which supplies large felt covered props and screens to the BBC. We rummage through their off cut bin and take red and white felt scraps; remnants from the forthcoming Queens Jubilee celebrations perhaps?
Just as we turn to go, a collection of felt ends on rolls in an array of vibrant colours are pushed our way. I think how much you could pay for a 10 inch square retail and I am delighted that this will be accessible to art and play workers. We get similar bright colours in PVC from an inflatables factory. This material goes down well, as does rip-stop nylon from a ballooning company.

Our final picks fill the truck with green plastic rods from an electronics industry, plastic signage material, soft, stretchy black rubber, empty medicine containers and redundant lever arch files from an insurance company. The truck is full to groaning and we’ve been out for 8 hours, stopping only briefly for a flapjack from Charlie’s favourite bakery in Kingswood. On our return, Jeff and the boys will unload the haul. Some will go straight into the warehouse, some will be stored and some will be swapped with other scrap stores around the country to ensure a wider variety and distribution of materials for community art and education.

As for me; I’ll heat up, my glue gun and get my scissors out. I have a large mural planned for the back wall of the Scrapstore, and I’m desperate to ‘bags’ some of that felt! 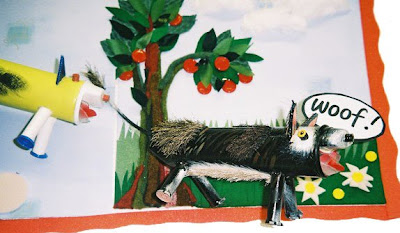 How fabulous. We have a resource centre out west in AUckland that's been going for many years. Open a couple of times a week (Wed & Sat), manned by volunteers. Materials are available for schools & eccs, craft groups, homeschoolers etc.
THere's one in Chch too - Creative Scrap I think. Is there anywhere like this in Wellington?

There was one called Funky Junk in Porrirua but it really didn't work so well- they took in alot of crap as far as I could see- mouldy mattresses and chipped china too- lost the whole point of it. The ChCh one is great- I would love to set something like it up here. I think I have to! We have Trash Palace but that more of a tip shop/recycling centre. You still come out feeling dirty if you know what I mean. Whats the one in Auckland called? I feel a fact finding mission coming on!

Yes I definately feel a trip comimg on.I will fit in other sav swilling writers too! I'm gonna forget the CNZ funding for literary works- its going to be all about recycling. Me and Fairy Glad, taking over Wellington with cardboard tubes and plastic offcuts. If anyone knows who I should apply to, let me know!

Hi Fifi,
Great bit on olden days there!
Now then - those photos were a real taster for what I assume MUST be more pics of the stuff you made whilst here.
Do you have others you can emailus here in Bristol?