Was it wrong to cry in ‘Mamma Mia’ the movie? Am I ridiculous for letting tears run down my cheeks in an emotion other than laughter? Call me shallow, call me a philistine, but it moved me. So why did it? Because I have a 20 year old daughter who is slipping away from me bit by bit? Because at 17, I was a Dancing Queen, grooving in the discos of Wellington? The answer is both.

That wondrous feeling of youth that you didn’t quite know you had until you didn’t have it anymore. The absolute assurance of dancing in a tiny scrap of cheesecloth, knowing that your arms wouldn’t flap and stray, wiry hair wasn’t going to peek out from surprising places. Knowing you could cast a glance and have a boy look back just as meaningfully. O.k., o.k., it wasn’t so difficult; boys would shag a goat if they got a chance, but you know what I mean?

And my daughter; could I really have made such a gorgeous being? Of all the creative projects I have had in my life, how could I have pulled this one off so well? And now when she is all grown up, making plans for a future that doesn’t include me in her everyday life (just as I did with my mother), how can I not shed a tear?
I still dance, wings and all and I embarrass her of course; because…me a mamma. 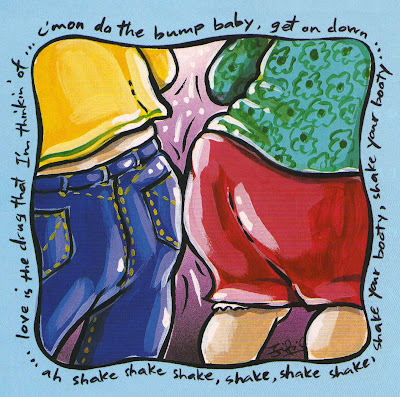 We put on some loud music,
From my youth-the seventies,
And we all got down and dirty,
To the Stones, and U.K Squeeze.

Then in a dancing frenzy,
My booty shaking all the while,
I had a little flashback,
At which I had to smile…

When I was just a nubile
Disco Queen in platform shoes,
My boyfriend of the moment
Appalled me with his news.

His Dad had just turned forty,
And was about to celebrate,
With a party at the clubrooms,
And could we go at eight?

Reluctantly I followed,
And stared with horror at the floor,
At a bunch of old farts writhing
To some ancient music score.

They all got pretty wild,
And I declared "When I'm old,
Strewth!
I'll behave with more decorum",
Ah; the arrogance of youth.

Lovely, Fi! Mamma Mia is wonderful - full of nostalgia, and I like the way Streep and her cronies have as much fun now as they did then - despite having wobbles in the wrong places....

I'm with you Fifi, and I cried too. But I also laughed and laughed and laughed. I was dragged along to Mamma Mia against my wishes but I loved it from beginning to end. In fact I think I'll go again.
If Meryl Streep and her female sidekicks don't pick up some Oscars for their superb performances I'll bemost surprised.

Hi Fifi,
Charlie from Children's Scrapstore in Bristol, UK here! You worked with us for a while about 6 years ago.
I'm not sure how to contact you other than via this blog so excuse the off-topic posting here!
I have a colleague at Worcester scrapstore who is trying to find out about scrapstores in NZ - I assume for an intended trip at some stage soon.
It would be great if you could drop me an email to - suppliers@childrensscrapstore.co.uk

Nikki is interested particularly in any scrapstores there may be in the South Island if you know of any.
Hope you are well.
Best wishes,