'So how is the novel going' you ask?

Good question. This link here describes the love affair with the novel more wittily than I could say right now because I am out of love with public transport. http://libba-bray.livejournal.com/36896.html

'What has this to do with the writing of your novel 'you ask?

Well, to preface (which I am told is something to avoid in a work of fiction) this morning I did all the hamster things at home that require the attention of ‘she who has no proper job to speak of.’ If I were a lawyer, doctor or policy analyst, I dare say that I would be exempt from cooking, grocery shopping and dry-cleaning pick up duties. But dammit, I foolishly trained in art and therefore must squeeze my profession around the breadwinner of the house. I could of course say a resounding feminist bollocks to that, but we would then starve, because the breadwinner is not a breadmaker and rarely gets home before one has contemplated eating the cat to assuage hunger pangs.


Patience reader… so I did the grocery shopping and obligatory waiting in the queue at the P.O, posting snails, then returned my car to its cosy garage. Bag packed with laptop, mouse, cables, charger, phone, wallet, diary, coffee, lunch, manuscript (1st draft) and playing cards (on which the novel is based) I then waited at what I have come to think of as ‘The Coldest Bus Stop In The World’. I am thinking of doing a Raymond Briggs style book about it; the place where the sun don’t shine; yes, the A-hole of Hataitai, but unless it is a dead polar bear, much much colder.
A heritage style edifice, dating from the early 20th century, lovingly preserved in tongue and groove, it is used mostly as a urinal. Today though, there were two empty cigarette packets and a half dozen broken beer bottles in it. Now that’s class for you.


The 12.57 predictably didn’t come as I stood there, icy wind tearing chunks out of my face and frostbiting my earlobes. The Flyer did, but it flew right by because it is the Flyer. A school bus did too- alas I am not a school child. Two 'not-in-service' buses also sailed past for reasons only known to Met Link. The 12.57 never came and as I stood there fairly well snap frozen, I made a snap decision.
Three minutes later I was in my car, petrol prices be dammed, the heater blasting around my feet on my way to the deli, where I bought a Pain aux Raisin and a flat white.
Parking is $4 an hour in Wellington, so working in at the advertising agency was out of the question and so were my 3000 words.


I admit the real reason I have resisted paid employment in favor of the spotty income of a freelancer is because If I had to spend two half hours a day waiting for unreliable buses to turn up, 5 days a week for 40 something weeks a year, I would surely kill myself.
I look at the clock and the main income earner will be home soon. Hmmm, must be about time to put the tea on, perhaps a bit of… 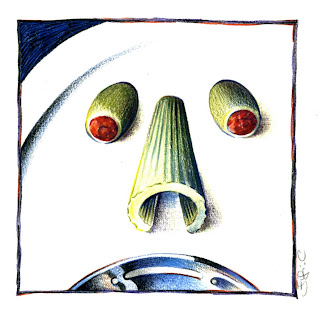 
'What can we have for dinner?'
I heard my mother say,
For some of my youth,
Well to tell you the truth,
Every year, every month, every day.

Why on earth did I need to worry,
About our daily repast?
There was homework to botch,
And the T.V to watch,
Whilst hoping she'd get it cooked fast.

Mum conjured up magic at mealtimes,
We really expected no less,
Then down we all sat,
Ate in five minutes flat,
Then left her alone with the mess.

Thirty years on I'm now staring,
With quiet despair at the clock,
It's a quarter to six,
If I don't feed the kids,
They'll probably go into shock.

The fridge is offering nothing,
But flat tonic water and mould,
Some limp celery,
Olives-just three,
And Shepherds Pie, five days old.

Election to first cook status,
Is not what it's cracked up to be,
I'd give it away,
For a fourteen hour day,
If somebody else would cook tea.

NB: it has to be noted that if I were to do the 14 hour day, and believe me I could, should there be a corporate position available for a four finger typist who is good at drawing olives, it would have to come with a company car park. Thats not too much to ask is it?

3,000 words a day on four fingers (or any number actually) would have to be something of a record. You're on fire, girl!
And I see that you too have discovered that fine work of fiction, the bus timetable.
xx
Fleur

come on over - the transport on this side of the harbour is fantastic. why, one of those Not in Service buses actually stopped for us the other day, returning home to write after our coffee in Days Bay. wouldn't let us pay either - well, of course not, don't want anyone to see you broke the rules.
but this morning, alas, the wind was so strong we could hardly stand up straight and the waves drenched our leggings and filled our walking shoes - so we turned around, got blown back to the car and, like you, drove to the cafe for our lattes.
go girl!
ann
ps. why an ad agency? free desk?

Love the Libba Bray. Brilliant. Love your description of your working day and especially your bus-stop. The frozen dead polar bear eh.

Near us the bus-stops are boarded up due to vandals - this means old ladies and groovy writers with lap-tops have to stand in the arctic cold. No cover at all. Bloody vandals.

Now get onto that statcounter, Fi.