Save me now Neil Gaiman! 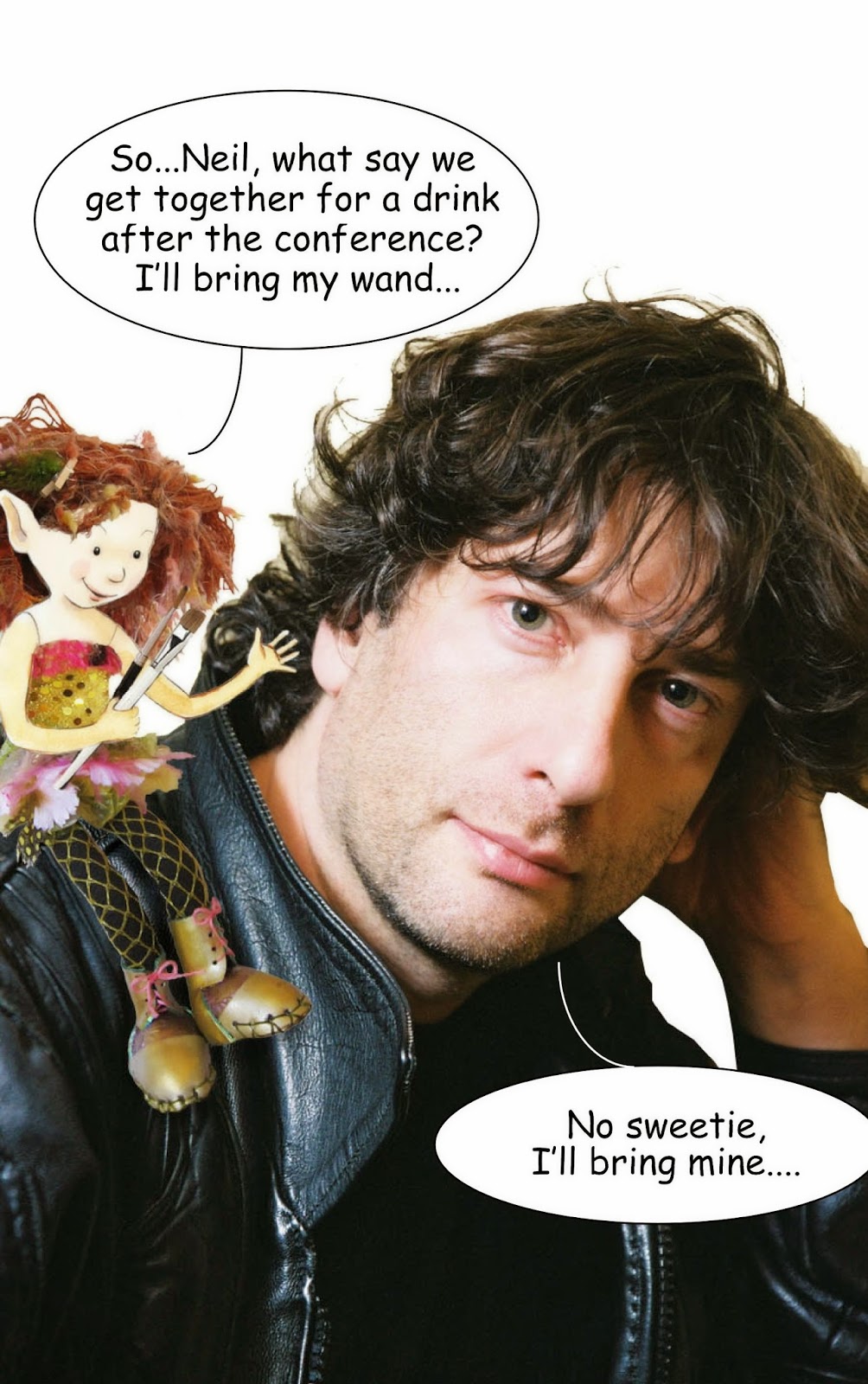 I saw a tweet today that said 'I've written a post, does anyone even read blogs anymore? But here it is'. It was retweeted by Neil Gaiman, so I'm guessing, yeah, some will be reading it.
Christmas, New Year and the summer (such glorious weather finally!) has had me nowhere near posting on my blog, so I guess Neil won't be following me at all but if he contacted me for any reason I'd be saying 'Why hellooooo!' with all due deference to his talented wife Amanda Palmer, whose book 'The Art of Asking' I've been reading all week (most excellent I might add- I'm one of those annoying people who insist on reading out bits of it to you when you'd really rather be digesting your facebook feed, or old school newspaper).

I think others have been reading it too because with January not even cold in the calendar (except in the northern hemisphere), I've been getting requests. Some are for commissions all of which earn me a living (I love those!) but others that popped into my messages and inbox just made me want to reach down the internet and throttle the sender I was so frustrated.

In fact, if I was Chuck Wendig I'd probably say something like this:

So, you always wanted to be a picture book writer? I mean you're a writer yeah? You've edited the Badminton Club newsletter and got three half assed short stories on the subject of Finding Your Lost Chakra nominated for awards no-one ever heard of except for the website which you paid $10 to enter their writing competition. You put it on your literary CV. Good on you. Right above your junior school swimming certificate and award for being a great maths monitor. Awesome dude!


You have this idea for a series of picture books and you just need an illustrator. It's the first time you've ever tried your hand at this but your stories about a kitten and duckling are so unique, if Golden Books had ever thought of publishing anything like that they'd have made millions. Imagine! AND you wrote it in verse! O.K some of the words didn't rhyme unless you pronounced them in a Canadian accent, and in the second verse, a Scottish one, but essentially, if you hold your head on one side and sort of force it to fit, it's brilliant. And your nieces LOVED it. Especially with the candy you got them to suck on whilst you read it out loud.


And you thought that it would really come to life (because it's barely got a pulse right now) with some incredible illustrations. And you thought that we could like, partner up and I could spend like 6 months creating the stunning pictures and then you'd submit it to a publisher and we'd all get rich and famous. Just....like....that.  I thought once that I'd quite like to be a surgeon because I cut up gravy beef for the dog real well. Give me your leg and I'll practice on you!


Sorry who the f*ck are you again?

And so on. I do Chuck a great disservice- he writes a whole lot pithier than this and uses a huge amount of epithets which I totally adore. Some of you right now might be thinking I'm a bit harsh, and a bit up myself and a bit like some Tall Poppy literary chick that has got too big for her award winning boots. Who on earth does she think she is, speaking her mind? Has she lost it? You might wonder.

Well now that I have your bristly attention I want to explain a few things. Us writers and illustrators try to educate others (for free) in our art, but it seems everyone with a notion of becoming a children's book writer never thinks to do any kind of research on the topic. Melinda Syzmanik's blog is a great resource for learning about this stuff. She is very patient; much more so than I. I'm all squawk and feathers whilst she is a quiet fox. And both of us know that seriously playing at being a writer is a long game, and it helps to know a few of the rules and strategies, otherwise you'll end up on the Monopoly Board with 2 utilities, mortgagee sales and no cash to pay the exorbitant rent being extracted by the hotels on each corner.

I have written novels, columns and blogs. Picture books are harder to write than most forms of fiction. No room for waffle, no exposition, no sermonising, no patronising, NO SPARE WORDS. Just a few good ones. And preferably not in rhyme unless you are a genius at scansion. I had a verse column in a major magazine for 8 years and know quite a bit about rhyme, but I don't do it for picture books. In fact I don't write them at all. The thing is...I can't think of one story that would delight and enthral a kid (or me and my inner kid) the way that a good picture book will do, so I leave that to the ones who are good at it and I do the illustrations.

On with the illustrators hat...

These are the things to know when asking an illustrator if they will do some pictures to resuscitate that dead duckling you've been carrying about with you for the last few years (or dashed off over a glass of pinot one Christmas evening after watching too many reruns of Home Alone).

A picture book takes 3-6 months to illustrate depending on the complexity of the pics. If it's a book about 10 different animals at 20 different parties, many of which include bicycles and differing sizes of dystopian cities, then yeah, that's probably the six monther. Maybe a year.

What do you earn in your capacity as something other than a hobby writer? Anything I'm picking from between $25,000 (low wage hospitality) to $100,000 (business analyst ) a year. An illustrator has usually spent 4 years in training at a design school and amassed probably around the same loan as you did for your commerce/other degree. Then gone out and interned for free, built up a portfolio of clients over the years by writing proposals, marketing themselves and  pitching for the work. They also pay studio rent, buy their own stationery, materials and coffee. They go through a lot of coffee. The real stuff. That's not cheap (nothing good ever came out of instant).

So you'd expect that an established illustrator who can come up with the right solutions might reasonably need between $15,000 (living on lentils in a scummy flat) and $50,000 (can afford a holiday and pay mortgage) income for six months work.

And here you are with your badly written manuscript, no credentials, offering to give the artist 50% of the royalties, after they've done the illustrations and after you've found a major publisher who has never seen a rhyming book about ducks before in their life, and likes the style that the illustrator has come up with. Too bad the artist has only ever drawn tractor and never animals, they can draw right?
O.K, I'm being freakin' brutal with you, but someone has to be because you just have to stop right there!

Royalties pay 10% on the retail price of a book, so you'll get around $2 per copy which you'll split with the illustrator (remember they spent 6 months on your masterpiece that you did in that weekend writing course).

The average first print run for an unkown author by a well known publishing company is 3000 copies. Not all copies sell and not all sales pay out the full 10% (book clubs, promos etc). So you are offering the illustrator a MAXIMUM of $3000 should the book ever get into the bookshop and sell any copies. Most books are remaindered.

Forgive me if we seem a little rude in our super polite replies.
Forgive us if we are crass enough to say we would certainly illustrate your book for $15,000 up front. No problemo. In fact, we'd put down our own manuscripts and start yours tomorrow. True.

There are always exceptions to the rule though. If Neil Gaiman emailed me and said, 'I have this great idea for a picture book, would you do a couple of sample illustrations for me to show to my publisher?' why, I'd be there and panting. Because he's Neil Gaiman, and he's a talented writery god and because of that, doing a book for such a person is money in the bank. And at the end of the day, however much we love our paintbrushes, the bank loves our payments more.

My next post will be about the much safer and less contraversial subject of fracking.
Over and out.