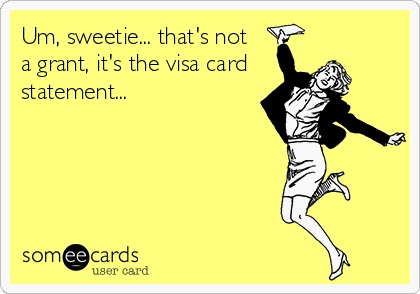 The latest round of funding from Creative New Zealand has been apportioned out and once again, my chapeau, though in the ring, was not picked up to grace New Zealand arts with my marvellous talent.
This is not an unusual state of affairs and in the children's book world a common one. At the last conference we had, Tessa Duder read out the funding stats. Because I never take notes, I can't give you them, but suffice to say if all arts funding is seen as a pie and literature gets half a Weightwatchers size slice, then children's book authors in that slice get a teaspoon taster and illustrators get what amounts to homeopathic filling; the hint of money watered down until it is just a memory of the smell of a dollar in a bottle of alcohol. No wonder we drink.

I needed some help to go to The Illustration Masterclass in the USA. I asked for $5000 to cover the course fees and airfares. I asked a friend who works in a completely different sector (not the arts) to help me with it and when she read the funding guide, this is what she had to say.

"I had a look on the funding applications on the Creative NZ website last night. Good grief they are awful. For a grant of $7,500 there’s a 33 page guide on how to fill them in the form!!


I’m currently putting in an application for $25k funding. It’s a one page doc that may require a second detailed application that would be no more than 2 pages plus a budget. The instructions amount to 3 paragraphs on their website. I could apply for $200k by extending my application by a page.


The CNZ website has a very patronising tone as well hasn’t it? “You will not be eligible if you haven’t cleaned your teeth this morning! Have you made your bed and cleaned your paint brushes? Hmm??”  So I can see why you are frustrated by it."

But still, she went through it and gave me some advice. I am a professional artist and writer, not a professional administrator like her, so I was grateful for the help.
I sent in my proposal backed up with support letters about my worthiness from 4 different bodies and an invitation to speak at a Boston University and a detailed budget. These applications take a week or more to write and coordinate, and if you don't put exactly the right amount of printed copies together in the right order, your application is deemed ineligible. It is the very finest art of bureaucracy.

Now, I am not saying my application was any more worthy than anyone elses; I'm pleased for anyone who got anything- these applications are like pulling teeth and we all sweat blood over them. I guess what I am trying to say to anyone reading this, is that as freelancers, we writers and illustrators aren't sent by our publishers to upskill, like those in the salaried workplace. When I mentioned the word conference before- we organised it ourselves and paid for it ourselves, to keep our professional practice up to date. To many of you not in the arts, this must seem astonishing. I'm amazed myself all the time, that something keeps me here, plugging away. I think it's the generosity of my family; they are all hoping that one day I'll strike it big and become the next best seller. If I ghost write an All Black Recipe book, I might just do it. It will be called Mehrtens Muffins. I think that has pick up appeal don't you?

As far as I know, nobody ever shares their CNZ proposals. Perhaps because they are scared that should CNZ get a whiff of them elsewhere, they will be shoved in a box labelled 'DO NOT FUND THIS F*CKWIT' and be forever doomed to writing books about poo that seem to sell so well at the Warehouse (sorry public, these are crap books, you have no taste or respect for your children's education and moral fibre. The writer just wanted to earn a sleazy buck).

So- for the amusement and edification of you all, here is my application. I even did appendices. I think that's worth somnething don't you?

Project Proposal
I am seeking funding  from Creative New Zealand to contribute to the costs of international professional development for my full time work as a visual artist by attending an Illustration Master Class at Amherst University (MA, USA) and giving a lecture at Lesley University in nearby Cambridge MA. Funding for this is available as outlined in section 3.9.1 of the Creative New Zealand Funding Guide.

There are no comparable Illustration Master Classes opportunities in New Zealand. The tutors I particularly wish to work with in a special topics group are Brian and Wendy Froud, for their experience in film concept and costume design which sits well with my own focus of Wearable Art and costume illustration for the film industry. Brian Froud's art was an early influence on my book illustration work when I was an art and design student at tertiary level. The Frouds do not visit New Zealand and rarely teach at master classes outside of the U.K. (appendix A: Brian Froud)

I have worked as a visual communicator and illustrator through the medium of books, film and performance/show since 1980. This opportunity is important for my career development as a practicing artist, illustrator, touring educator and workshop presenter in the arts in New Zealand, particularly as it relates to young people. I will be able to focus on producing a series of illustration works using new taught techniques which in turn I will be able to pass on through my workshops in New Zealand. The professional networking will be invaluable, as the roll call of tutors at The IMC only gather together as a group in this one location for this particular intensive. (appendix B)
The tutors cover a full range of disciplines from film concept illustration to the graphic novel. This is a residential, hands on, full immersion master class for the experienced illustration artist and there is nothing like it in New Zealand. I will be the only New Zealand artist to attend and look forward to sharing my work and experience in the New Zealand arts with the other participants.

I have also been invited to speak at Lesley University Creativity Commons (MA) (appendix C)  on the subject of creative practice in New Zealand, particularly as it relates to working with young people. This is an opportunity for me to promote our visual arts and how we teach this within the educational and public communities through the likes of The Book Council (Writers in Schools) and the Storylines Festival.
In my past 33 years as a full time working visual communicator, I have covered a range of artistic disciplines as evidenced by my CV (attached), and a fundamental part of my core practice is to encourage and support young people to participate in the arts, which ultimately benefits all New Zealanders. I believe this fits well with the desired outcome of Creative New Zealand as defined by  section 4, Arts Council of New Zealand Toi Aotearoa Act 1994

Appendices
(appendix A) Froud was the conceptual designer and costume designer for the films The Dark Crystal and Labyrinth (both in conjunction with Jim Henson's Creature Shop). He collaborated with Terry Jones, who was a screenwriter on Labyrinth, on The Goblins of the Labyrinth and subsequently on a number of non-Labyrinth-related books about fairies and goblins, namely of the "Lady Cottington" series. He has also worked with American writer Ari Berk on more recent books, including Goblins and "The Runes of Elfland", and produced art books such as Good Faeries/Bad Faeries. One of his most famous art books, Faeries, produced in collaboration with Alan Lee, was the basis of a 1981 animated feature of the same name. (Source: Wikipaedia)
(appendix B) 'A large part of our students body every year consists of professionals seeking to try new things within their technique, meet other artists, network with art directors who come for portfolio review and simply spend the week getting even better at the thing that they love to do most: ART!
Past students/attendees have gone on to forge into amazing places within their area of illustration and work with wonderful companies, writers and directors like Wizards of the Coast, Jane Yolen, Cassandra Clare and Guillermo del Toro.'  (source: Illustration Master Class website)
(appendix C)  Lesley University: The Cambridge Creativity Commons engages Cambridge public school students and teachers in imagination and exploration of ideas that matter and creation of interdisciplinary projects in and through the arts. The Cambridge Creativity Commons (CCC) offers programs in a “creative lab” model to encourage cross-disciplinary collaboration among teachers, artists, scientists and students to facilitate creativity. Founded on the principle that every child is creative, and that this ability can be developed in environments where creative processes are practiced, the CCC works with CPS teachers and OST staff to develop new approaches to teaching and learning through meaningful, creative programming that integrates arts and sciences curriculum. The CCC serves East Cambridge students in grades 1-8, primarily from the Kennedy-Longfellow Elementary and Putnam Avenue Upper schools, as well as out-of-school programs, at no cost to the district or the students.
The CCC has emerged as a distinctive creative program in Cambridge under the guidance of its Partners Advisory Board: Dave & Doffie Arnold, the Cambridge Community Foundation, the Cambridge Public Schools (CPS), the Cambridge Arts Council, and Lesley University’s Creativity Commons and College of Art & Design.

Good on you for this “rant” as they are bad.
I read the forms and gave up … at least you applied … but I sometimes wonder if getting a paid job for the amount of time that it takes to research and fill in the forms would be a better way to get the money haha

Have you thought of those sites where you request money for a return in what you are doing – sorry can’t think of the names of them – there are a few.
If you do I’d add my few dollars for your trip 