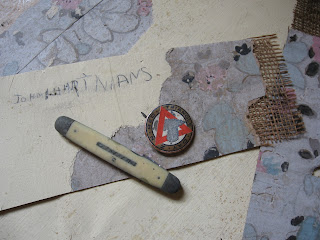 I'm quite busy at the moment; what with the launch of The Red Poppy tonight at the Children's Bookshop in Kilbirnie, working on another picture book for Scholastic and tearing the kitchen apart to create a nice clean space for new joinery. When I say 'I' in regard to the kitchen demolition, I mean Graham our builder who mercifully understands my appreciation of the layers of old wallpaper being uncovered in our 1910 villa. He stands aside whilst I photograph, peel and save patches of history, exclaiming all the while 'Oh, this is where they did a renovation in 1980, and this wonderful pattern from 1960 and... why this must be from the second world war, and this... wow that's on top of the original scrim!'

We have found no less than 7 layers of wallpaper paint and scrim; each telling its own particular story. This is more exciting for me than the prospect of a new kitchen (in which I will have no more excuses not to cook).
Graham beckoned me over yesterday and said 'Look what I found' and there, tucked in between the wallboards and floor were an old pocket knife and a Red Triangle Badge. I googled the latter and found out this information:

The minister of Internal Affairs approved the Y.M.C.A to hold a public appeal for funds to assist their war work. It was decided that the appeal would be known as "Red Triangle Day" to be held on March 15th, 1917. The YMCA undertook considerable work within New Zealand and especially overseas during the war, providing Christian based home comforts, accommodation, social and recreational facilities and entertainment, convalescent facilities, and canteens. Providing Christian based facilities and fellowship was seen as a necessary alternative to safeguard soldiers from often immoral and corrupting alternatives.

It is serendipitous (and just a little spooky) that we found the badge this week, and our Anzac book launch is today, March 14th, 95 years later almost to the day. I like to think it is a sign from the universe that our efforts are being recognised and those soldiers who were thrown to the lions in WW1 approve. We live today, as they would have hoped, in a country unaffected by the hardship and terror of war; long may it continue.
Posted by Fifi Colston at 11:29 am

This gave me goosebumps (in a good way). But then, Fifi, how could the universe not approve of this fabulous book!!