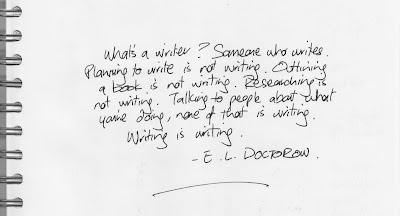 So, I’ve joined a writers group. It was by accident really; I just thought I was going to lunch with a new literary friend, but now find I am signed up for monthly critiques and in depth analysis of my work. Apparently it’s not all about drinking copious quantities of wine and gossiping- that’s a bookclub. Darn.

I have my reservations about all of this- and it’s nothing to do with the people. They are wonderful and talented and generous with ideas. It’s me. I haven’t written anything approaching a body of work since...oh... my last novel, Glory, which was published in 2009; I wrote it in 2007. That’s basically, well you do the math, subtraction was never my strong point- I only add stuff to my life. Which I have done cheerfully for the last few years; Wearable Art, working on TV and in the film industry, illustrating, running workshops...but add another word to my novel(s). Well that’s a bit of a problem.

I had a long discussion about this with Brian Falkner and Kyle Mewburn at the recent Bloom Family Festival where we were contracted to tell stories and run workshops. It was a very happy weekend with fellow writers, artists and of course our audiences. I shared accommodation with the boys and was most impressed to see Brian tapping away at his Macbook each morning before we forayed out to the festival. He was finishing his next work; I was just trying to wake up and smell the coffee.

‘Why?’ I said, ‘can’t I just finish my sodding novel?’
‘Do you like what you are writing?’ they said.
‘Yes- I think it has legs and backbones to boot.’
‘So how did you write the other ones?’ they asked.
‘I just sat down and wrote them.’

And I did- Verity’s Truth was for a competition with a deadline. Janie Olive was as a distraction from the thesis script I was writing whilst doing my MA at the IIML, and Glory just because I could and had something to say out loud about not winning prizes. None of them took me that long and I had so much fun bashing away with two fingers at my keyboard, delighting myself with words and fitting all the parts of the plot puzzle together.

‘So what’s different with this one?’ they said.
‘I’ve shown it to people before it’s done.’

‘Ah,’ said Brian, ‘in the words of Stephen King, in his book On Writing, you’ve let the steam out.’
And that is exactly what I’ve done. I’ve committed the cardinal sin of showing too many people the WIP and asking for their opinions. And they, being wonderful and generous and knowledgeable, have given them. Shit- what an idiot! I now have not one, but two unfinished first drafts with lots of conflicting sticky notes and pencilled comments. And I know better than that. Really.

In all my other work practice- making wearable art, illustrating a book, designing a workshop, making crafts for TV...I NEVER show my rough ideas to others for comment. There are two reasons for this:

The first is that they might not understand what I’m trying to do before the problem solving is done and give unwanted advice from their perspective on how it should go. For instance, if I’m trying to make a piece of wearable art that says something about, oh let’s say... Arthritis (I’m not by the way), then I may have a real life experience of it that is different from another person’s. The thing I want to impart about it and the expression of that view (down to the materials and method used to make the artwork) will be different in my cerebral cortex than any other artist’s. If  I ask for advice on an unfinished plan, I’ll get helpful suggestions on what to show, what to say and what technique to employ- from SOMEONE ELSE’s experience. That’s no good to me at all- it will confuse me and make me doubt my conviction. This is very different from asking someone how to do resin casting so I can make the bone centrepiece that I’ve designed (and I haven’t ...once again, this is not a real piece I am making. This year I’m doing a Bizarre Bra which has nothing to do with aching limbs- aching fingers whilst I make it perhaps...). I only need structural help when I’ve made the creative plan. This is what an editor will do for a manuscript ... are you reading this Penny? (my beloved Scholastic editor).

The second reason for not showing your undies before you’ve got dressed so to speak, is that you lose the excitement of knowing you have something that is only known to you. It’s your sly secret; your guilty pleasure, an affair with a whole world and bunch of characters that only YOU know about. It’s your illicit lover, to which you’ll go back late at night when everyone is asleep and you’ll play with each other and dream impossible things that ordinary life doesn’t allow. You won’t leave it alone until the passion has run its course; the first draft at least will be finished.

And as Brian said whilst his fingers stroked the keyboard, a naughty smile on his face (yes I was watching Brian!), I’ve let the steam out. The passion and the thrill has gone and I don’t know how to get it back... I’m stuck with the predictability of everyday life whilst my writing muse is off shagging someone else’s brain and making them uber productive and on the way to writerly fame (Kyle Mewburn, that will be you). Apologies for the overly sexual nature of these analogies, but without passion all art is merely inoffensive wallpaper- and I DO have a bodice ripper I’m working on as well as a YA.

So, at our writer’s group meeting, we said what we’d like help with and what we would share and how long critiques would be etc etc. I declared that I would NOT be sharing anything and didn’t want critiques (the ones we had at the IIML nearly scarred me for life). But I DID want the group to hold me to account regarding finishing the YA at least. I gave them full permission to beat me with my own pages if I have not progressed from one meeting to the next. They cheerfully agreed.

Holy moley, I’d better start writing, or the next time you see me I’ll be covered in paper cuts.

Nice post, Fi. You are so right - I've over-talked and over-shared my no. 2 novel, and I'd also over-planned it, writing a full synopsis because Creative NZ asked for one. Aagh - talking about taking the steam out of it. Writing is such a lonesome thing requiring loads of self-motivation, we need at least to feel passionate and excited about it. So I'm trying to throw all that stuff away and get into it again as if we're starting over - the novel and me - after a bout of marriage counselling - fresh, excited, inspired... and see what happens next.... good luck with yours.

Isn't it strange how we all operate differently; my mojo is flagging because I'm NOT talking about it. When I had the babes and Vicki (book one), I wrote the first draft of Banquo's Son in under three months; I still had Vicki and also my agent Josh for Book Two and the kids to talk to. For Birthright, I've been largely on my own and I've been so much slower (out of sight, out of mine?)

But, I do like your commentary and I can understand it esp about everyone's varying opinion - that can be soooo confusion.

Fifi, this is a great blog post, and most of it is true. (I wish I owned a Macbook!)

I'm a loner when it comes to the writing - I can't bear to show it to anyone else, hence I don't belong to a writing group. My problem is life gets so damn busy a month can slip by and I think, crikey, have I managed to write anything?

Yes, Fif, I have read it! Wise man, that Brian.

My advice is to put the lid back on the pot and build the steam back up again ... :)

Then I look forward to reading the potboiler that will result!

(Beloved, indeed. Flattery will get you everywhere...)
xx