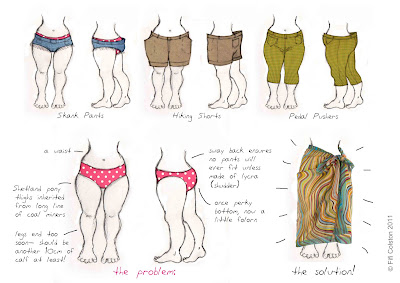 Today along with the rest of Wellington, I did what is normal when confronted with the calmest and sunniest of days in our oft inclement capital; I drove straight into town and hit the Boxing Day sales. It was a bun fight I tell you and my particular mission was to cover my own buns with half price pants. To ensure I had the best advice on what suited me, I took my adult daughter, a veritable savant for clothing. I also took my cash because she gets terribly hungry shopping; I blame that on her early experiences as an enfant, when in new mother desperation to get out of the house I would load her into a buggy and push her up to Merivale Mall where we would start with coffee and a bite to eat and end up in Quinns. When the February quake hit Christchurch, we both wept to see those devastating pictures of shoe boxes hanging out of the establishments exposed second floor...

“I’m after shorts” I declared, “something for our holiday next week, sort of mid length cargo kind of things.”
“Hmmm” replied the Knowledgeable one, “I’ve never really liked you in those.” I’ve worn this sort of thing camping for about 20 years now, so this was news to me. How long have I embarrassed her with my comfy strides?  Two decades apparently.

We started with the obvious, Glassons where I have bought all my previous shorts. I looked around but all I could see were tiny little frayed things that required much bikini waxing and labial tuck surgery. Some of them went up to size 16 which had me quite alarmed at the images that crowded into my head. Camel’s foot and all the humps. Luckily there was a pile of longer style shorts which the Savant delightedly assured me were the favoured style of cruise ship tourists. I ignored her and tried on 4 pairs, some with turn ups, some without. They all ended above my knees which end shortly above my ankles- height not being a terribly strong feature of my family’s genetic code. I looked quite like one of The Hobbit Dwarves on a hiking holiday.

Kathmandu had an extra 20% off everything that was discounted by 50%. That made pants a mere $78 for something that didn’t fit either. “These are fricken boring” said the Savant, “let’s get some cake.” Their pattern cutters work with leggy Norwegian backpackers for a template. As I am  a) miserly and b) not called Astrid, we went on our way.

The cake shops were shut and I was surprised that a 23 year old can sigh just as long as she did as a tot on retail excursions; especially when we went into Max. At first it looked promising; racks of long shorts, or was it short pants? I gathered up an armful and headed off to the changing room. There were a few waiting before me and we patiently stood garments in hand. It was good practice for the shower queue at the camping ground. What DO people do in those cubicles? Are they wearing enormously complex support undergarments that require much lacing, or maybe they are Libran with the decision making ability of a jellyfish. Many foot tappings later (and more sighs from the daughter) I was in and out of the changing room in under a minute. It doesn’t take THAT long to realise something doesn’t fit- the minute it won’t pull up over your calf muscle or do up at the waist, or shows far too much bra indentation, it’s a given that you won’t be thinking ‘Maybe...’ If you do, you have far too much disposable income. Give it to me; I’ll invest it in shoes from I Love Paris.

I won’t go into the detail of every shop and pair of shorts I tried on. We could be here for hours. I certainly was. The last pair I tried on was no better than the first. I wanted cargo pants; they were pedal pushers. They were designed to forbid my knees from ever cycling again. Wide at the hip, skinny in the leg; like miniature rugby goal posts, making me feel like a front row prop trying thrash my way into them. My hand wandered towards another pair on the rack.
“No!” barked the Savant “they are menopausal green!” I withdrew my fingers from the sap coloured fabric as she muttered about ‘Women of a Certain Age’ and their predilection for top stitched shoes and ghastly Hulk clothing. To lighten the mood I picked up a pair of white Capri pants and suggested I buy them. Over the years we have shared many snickers about the suitability of white to cover one’s derriere. The possibility of VPL, flower print knicker show through and the ever present threat of menstrual catastrophe has meant that we have restricted (in our heads) white pants to pre-pubescent and post menopausal women. Therefore, when we see someone of an age between that band wearing them, we share a disapproving moment. It bonds us and smooths over any differences in opinion on any other topic at hand.
“Oh God Mum, you are a good ten years away from those and then you’d have to holiday in Majorca in them,” she said rather too loudly for the Yorkshire woman in white capris standing next to us.

We tried one more shop, Jay Jay’s. There was nothing for me there at all, but the Savant tried on three pairs of cute little vaguely vintage numbers. They looked amazing and were only $30 a pair. I admired her lean and (longer than mine) legs, her tiny waist and pert bottom. “Are you going to get them?” I asked breathlessly. Heck, I’d have bought all three for her; such was my delight at finding shorts to fit someone in our party of two. “Nah,” she replied, “they aren’t quite perfect.”
“Sweetheart,” I said sighing louder than she ever could, “that’s just pants.”

I soooo enjoyed this post, Fif! I hate shopping for clothes these days. Why is it that when you had the figure you had no money to buy clothes, and when you have money (not really, but I pretend), you hate everything you try on!

Hi Fifi - Can I interest you in a free pair of Icebreaker pants. We are a carbon neutral online retailer and have a large selection of icebreaker clothing including... pants:
Villa Pants and Lily Pants. If you would like I would love to send you a free pair and if you like them perhaps you could see fit to mention them in a small review?

If there is anything else you would prefer please just let me know.

why yes Conrad- send me a pair and I'll write a stunning review if they stun me!