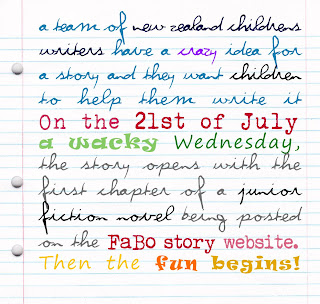 9 Mad Writers. 1 Crazy Story. No Idea What Happens Next.
A team of New Zealand children’s writers have a crazy idea for a story and they want children to help them write it.
On the 21st of July - a wacky Wednesday - the story opens with the first chapter of a junior fiction novel being posted on the FaBo story website.
Then the fun begins. New Zealand children are being invited to write the next chapter, at the same time as one of the FaBo story writers, and send it to the FaBo Team. The winning kid’s chapter will be posted side by side with the FaBo Team’s version.
Each week New Zealand kids can write the next chapter, while the Fabo story team tries to out-write them and take control of what will be a wild and crazy plot.
Kyle Mewburn, FaBo story team leader, said ‘On week 1 - Writer A writes chapter 1. In week 2 - Writer B writes chapter 2 and completely messes up Writer A's original idea (while cackling gleefully and rubbing evil little hands together). In week 3 - Writer C takes the story off into a completely different direction altogether (while cackling gleefully etc).
There will be competitions, prizes and ideas stolen.
Kids can write as part of school or library teams or on their own.
The FaBo Story website opens 21st July @  www.fabostory.blogspot.com
All details will be up on the website in time for the start of term 3 of the school year.
The name FaBo was chosen as short for Facebook as the writers initially discussed the idea in a facebook discussion.
The FaBo Team want the story finished by Christmas. ‘We’ll need a nice lie down by then,’ said Team Member Maureen. ‘We’re up against New Zealand kids, it’s going to be tough!’
The writers are spread around New Zealand geographically.
Kyle Mewburn is in Central Otago. Michele Powles is in Dunedin. In Wellington,
Fifi Colston, Fleur Beale and Maureen Crisp.
Auckland have four writers in the team, Melinda Szymanik, Brian Falkner, Kathy White and Tania Hutley.
For the FaBo story writing team, email here

Fifi, do you know if this has been put up on the school and public library list servs? I can do that if it hasn't.
Crissi

I don't think so- we are just trying to get it out there, so yes please!

Ah, I just did that without reading these comments - it looks like it will be a lot of fun for all participants. From Bookbrainz