The Birth of Velvet Wins!

Well not the entire Air New Zealand South Pacific section of the 2008 Wearable Art Awards, See the winners here but I thought Commended and a cheque was pretty darn good. The cheque will go into my Pacific Island holiday fund and the joy of walking up on the stage to recieve it will stay for ever! Photo below courtesy of WOW and the others are from my files (many thanks to my models Haley and Steve). Click on the photos for a bigger view.
You can also see it performed on this video link about WOW- mine is right at the end!
Click here for the video 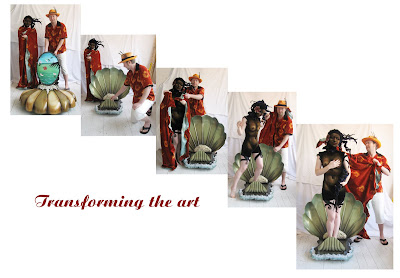 Edgar Leeteg, the velvet painter of idealized Tahitian women as noble savages, with full breasts, fertile hips, and starry eyes. Tourists loved these souvenirs of the , a holiday from Western morality. They represented an innocent sexuality; like Eve, their nudity was without shame. But was he more exploitative than celebratory? Was he just a philandering white man disempowering and objectifying his Polynesian models? Or did he just love them as Sandro Botticelli adored his model, the beautiful Simonetta, mistress of the Medici on whom he based his Venus; the mother and patron saint of all the forces in creation. 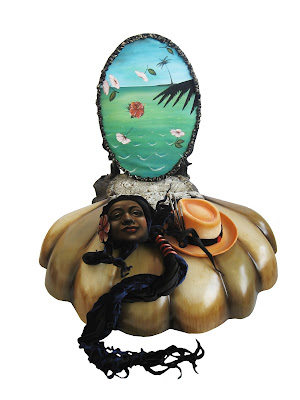 That is amazing. How do you think up that stuff, let alone make it?! Well done.

Well done Fifi. You're an inspiration!

WOW. And wow Fifi. You are so clever, so imaginative, no wonder you write such great books for kids.
Congratulations and love,

Crikey girl, how on earth do you manage to spread your talent so far and wide, and keep it all so light and humourous with no tripping on what could be an enormous hubris.... you're amazing.

I'm off to WOW (for the first time next Friday) - so I look forward to seeing your creation.

You are all so generous and lovely in your congratulations. Thank you all! I would also like to mention that I used Bob Kerr's studio to create it in- he is such a talented chap, some of that excellent energy must have rubbed off. I used his paint dish to mix up my gold glazes and left nipple shaped bits of masking tape stuck to his floor...

crikey, you're a genius.

Oh Fifi! I congratulated you here but it's got lost somehow. I am so proud of you. WELL DONE (all that drawing on desks at school paid off after all)

Hey Fifi, how about putting some of your birds on velvet up on your blog (if you're still doing them). Was showing a friend your WOW entry and telling her how you've done fabulous paintings of birds on velvet and wished I could show her.

I saw the show this year -

was soooo plaesed to see you got aknowlegdment for this wonderful peice!